Short weather report: on and off weather, meaning days with temps of ca. 13C, little rain, sometimes a day with sunshine and suddenly temperatures around 20C, like yesterday, but today it is again greyish, less warm and next week will be a  bit of everything, some rain, mostly cloudy, temperatures not higher than may be 16C. Not the kind of weather I want for the second half of May.

I told you we have a pair of blackbirds with a nest in our garden. Last week we found a youngster in the garden, still little, perhaps fallen out of the nest. we tried to put it back in the ivy near the nest but that didn;t work. The parents however tried to feed it on the ground, but two days later Jan found it dead in the garden. Probably it was still to tiny and the nights were rather harsh.
But.... they had another and we found that one too in the garden a few days later. Yet this one was much fatter and was also fed by both parents, as far as we could see. It was going around in our garden, finding all the time great hiding places.
Unfortunately we lost track of it so we don;t know if it is still alive. I do hope so.
It is possible, because we see the two parents searching for food in our garden(I give them bread crumbs and some tiny apple pieces) and going somewhere with it. So may be this youngster will survive. I do have a photo of it, when it was sheltering near our patio where Jan was sitting. 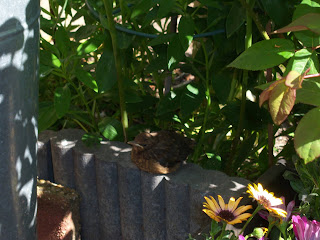 
I also have some photos of our garden, specially of two new plants I bought.
First one is a Convulves, it will grow to about 60 cms. and it should flower all summer right to october! 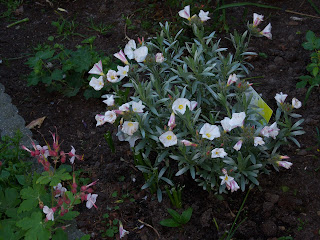 Then I also bought us a bush or little tree, I think it will grow more into a amsll bush, it is named an Acer palmatum, and if all is well and it survives, in autumn it will color into orange or dark red color(the leaves, of course)
Now it is still very small, I hope you can see it well on this photo: 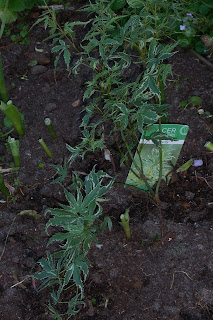 And as last I have a photo of a Petunia" Millionbells". I love the two colors on it. 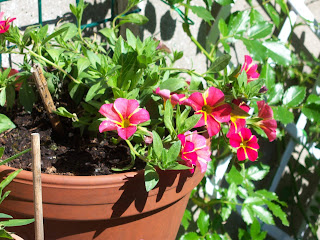 So as you would think, I spend a bit of time in the garden, and yes, a little bit I did. Very relaxing, I must say.
But there were also the usual things that took my time, of course.
On the bright side I can tell that by natural way Jan already produced two tiny little stones, so he was wondering if it still would be necessary to go to hospital tomorrow for the crushing operation. Well, I told him we are going, and we can show the doctor the stones. Still I think they will do the crushing, I don;t think all bits are already gone from the uteris.
so tomorrow we will have to get up very early in the morning, because we have to be at the appointment at 08.45!! Gosh, it will be hard to wake up at may be 07.00 already! We aren;t used to that anymore LOL!

Yesterday I did a favour to my friend Heidi. Yes, In the afternoon I went to her house to take a walk with the little dog. The family was on a day out and she asked me if I could do the walking. I did so and the dog was happy and Heidi too. I was lucky that it was nice weather yesterday, and after I did the job, I walked to the city center(about 15 minutes walk from her house) and did visit a couple of stores and aftern an hour or so I went home with the tram.
and by then I was real happy to have a seat with a cup of tea!

Oh, did any of you by chance watched the Eurovision songcontest on Saturday?
We did, because we had a singer there representing our country, Duncan Laurence(I think I already posted a link to his song last week?????)
Anyway, he did win the contest! At first it didn;t seem to happen but he got a lot of votes of the televoting public! We didn;t win that contest for a very long time, the last one was, I believe in 1975!
So congratulations to Duncan.
(If you would like to hear some of the song it will be easy to find on the net)

Well, I think I take my leave now, not without presenting to you some lovely clusters from Arlene, made with the Cozy Home kit.
Then cross your fingers for Jan, that after tomorrow Jan will be without any little stones, and that it will stay that way too. (He will have his control appointment in two weeks time, then we will know more).
I wish everybody a very good week, with some real nice weather! 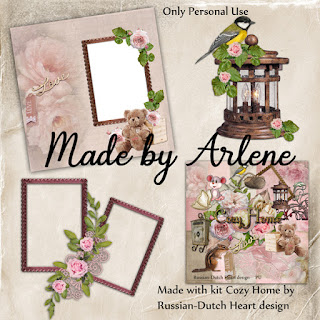 Kyra, your plants are beautiful! And that baby bird is so precious. It's always sad to find one that doesn't make it, so I hope the other baby is doing just fine. Such good news about Jan's stones. It will be so good when they are all gone.

I know how you feel about sitting out in your garden area. Especially on a warm, sunny day. That's how I feel about my little porch. I am going to take my Portal out there too so that I can listen to my videos while I relax out there.

Arlene's clusters are beautiful. Thank you. She does lovely work. Now I'm off to watch Jewel School on TV. You have a wonderful day and week my friend, hugs, Edna B.

Thanks to Arlene for Clusters. Very pretty. and the Teddy bear one will get used real soon.

Hello and Thank you Kyra and Arlene for these lovely clusters. I am doing catch ups again...