Early start of the day

Yes, another early start today, but I don;t mind that too much. Jan is working this morning, so we have some free time again LOL.
Wednesday evening we watched a soccer game, an "excersise"game of the national team against the Belgian national team. It's all in preparation for the competition towards the world championship soccer in Brasil in 2014.
And Jan and I were really bad this time. You should think we supported the Dutch team, but no, in fact we were for the Belgians. Well, it has a reason: the Dutch team is taking it too easy peasy at the moment, they have to learn that they need to work together and that it isn;t a game for only solo actions. They played a bit better already, the new coach changed a lot of players, so we'll have to wait and see how they will do in future.
But the belgians played rather well and won the game 4-2! Even if it's a "friendly"game a match between Holland and Belgium has something special.

Yesterday another great day, really summer. So I did some things in the morning, like running to the supermarket for a few things and home again I had a washing machine to turn. It wa quickly filled, because I had to wash a big curtain ( and oh my God, it was of a strange colour ).
Jan has a little problem with the curtain in the bedroom, it leaves through a bit too much light to his liking, so I found us a spare one, but had to clean it first. Now we will try that one and it may be a bit better. Then I became all enthousiastic about the washing LOL and washed also two winter jacks. They are now all clean and fresh and ready to be used, but I hope they will not be necessary for a long time though.
Then I had a real startle later in the morning. I was busy in the kitchen and had to go to the living room for something and suddenly heard a men's voice saying "hello"to me, coming from the garden door! It happened to be Jan, who came home earlier, because something had changed in his schedule! My heart was pounding a bit, you know! I didn;t notice him coming in, as I was real busy at the time.

Early afternoon I had a phonecall from Heidi, and she came along to tell a bit about her holiday.
We had a nice time all together in the garden, and it seems we will get a parasol and barbecue from her, which they have as spare. But they are still in good shape, so she thought it was a pity to just throw it away and asked if we could use them. Well, why not, her parasol seems to be even a larger size than the one we have now, which can be useful. And the barbecue? We don;t do much barbecue, but perhaps only because we don;t have one standing around LOL.
Oh, she also told us they now have another doggie, a puppy of the same breed as the one they already have! For a laugh I asked her why she didn;t consulted us first, cause we are the ones who have to take care of the doggies when they have an appointment somewhere and gone for a whole day. ROFL. Just kidding, it doesn;t matter if we have to walk with one or two little doggies, of course. So it seems I have to make a visit to her soon to take a look at the new member of the family.

So all together I didn;t spent too much time at the computer yesterday, but did upload two new kits, and I would like to start another one this weekend. Let's hope some inspiration will come along.

Yes, wanted to say this to you: I am planning to shorten a bit the list of My Freebies Together, by removing the links of a few months of last year. May be you want to download some of them if you didn;t already, and I thought I might warn you. I am thinking of the Christmaskits of 2010 and perhaps the months January till August of last year.

I have some clusters from Arlene, made with the "Home is where the Heart is"kit. 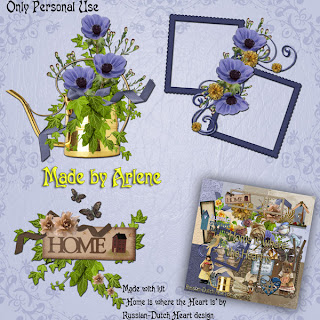 And yes, I tried my inspiration again on a fantasy kit, named Fairies Delight.
I do love working in pastels, but sometimes I just feel the need to use some bolder colours, although in this kit it isn;t too bad yet LOL. Anyway, I hope you have some use for it.
Have a wonderful weekend! 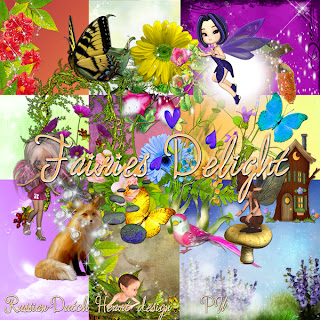 Thank you so much for this post. I want to let you know that I posted a link to your blog in CBH Digital Scrapbooking Freebies (please, notice the new url for my blog), under the Page 6 post on Aug. 17, 2012. Thanks again.

Thank you so much for this post. I want to let you know that I posted a link to your blog in CBH Digital Scrapbooking Freebies (please, notice the new url for my blog), under the Page 6 post on Aug. 17, 2012. Thanks again.

Gosh, I wonder why Heidi would be wanting another dog where they go away so much. Oh well, maybe the other dog gets lonesome and needs a playmate. I can understand that.

I had to go in and delete a lot of my older links too. This way, I don't use up so much bandwidth from Blogger.

I'm at work now and have to get busy here, You have a wonderful day. Hugs, Edna B.

Thanks again dear for another entertaining blog...just makes my day to read of your escapades! Lovely gifts from both you and Arlene as usual. Hope you enjoy your beautiful weekend and make lots of memories to share and pick up some more inspirations for the fabulous gifts you give us! Lots of hugs! Mat

Always love hearing about your days and is happening in your life. The Fairy kit is adorable. Thanks so much.

WOW your new kit is great!
Thanks for warning us about your freebies of 2011, because I've discovered many wonders, and of course I've saved lots of "old" kits! I'm not sure that my computer will survive, LOL! But once again, thank you so much.
Here we have a heatwave too, so take care and have a nice weekend,
Florence

Hello and Thank you for these lovely downloads...
Linda

Thank you, Kyra and Arlene - so cute and very pretty

Hello and Thank you for the chance to catch up on some of the kits I'd missed. You certainly have some lovely work...
Linda

hahahaha..... I know the feeling... Reggie scared me like that as well. I almost peed my pants,lol. It's hot here as well, they are saying today should be the hottest day of the year so far. Mind you, that's only in the 80ies, so compared to what we had in NC with over 100 degrees it's a nice cool breeze. Have a nice weekend you two :) Hugs Snowy

thanks again for all your gorgeous kits. My oldest cat just turned 17 and i'm going to use one of them to do a layout featuring her.
Hugs,
Cassandra