Oh my, I was a bit pissed off!

Gosh, we suddenly have real summer overhere. Yesterday it was around 77 F, even at a time it was a bit stuffy, and that isn;t too nice. Okay, let's count the blessings anyway LOL. Rest of the week it might even become warmer, till around 82 F!
Good thing, Jan has morning shifts all week!
Oh, yes, I will try to explain this, cause I was really a bit pissed off by it LOL!
On Monday's the agency works out the working hours of the employess, like for Jan. They do that very nicely and quick, and put them on internet on their site.
So you can check if everything is in order. Most of the times it is.
But last week Jan got a phonecall if he could take an extra shift on Friday morning(he already had one for the evening), the institution desparately needed someone. Okay, he agreed no problem.
The flex workers are hired in for a certain number of hours by the institutions through the agency.
This was for 4 hours. And Jan worked that time.
On the schedule it also was mentioned as 4 hours. But on the weekly overview of the agency there only was mentiond 3,5 hours for that certain institution. As I am acting as Jan's secretary LOL, I asked him if possibly that was right, perhaps he finished his shift a bit earlier. No, he didn;t.
But when flexworkers have to turn in their list and sometimes keys from the clients after their shift, there is nobody of te institution around, so it has to be dumped into a mailbox or something.
So I phoned the agency first about the missing half hour, they told me to phone the institution and so I did. Person in charge, oh miracle, wasn'around, but I explained what it was about to somebody and she told me I would have a call back that same afternoon.
We did get a call back, but from Jan's agency, and they explained why there was only 3,5 hours on the list. The institution counts only the time you are actually at the clients houses, and nothing more and they (the insitution I mean) even claimed Jan was back earlier! How do they now, they weren;t there at the office.!!
But normally you are hired for say 4 hours, perhaps you need 3,5 hours for the clients, but also spent first a bit of time at the office and then you have the travel time on the bike between the different addresses. And they count that to as working time, well, most of the institutions. But not this one. And it's not the first time Jan had trouble with this certain institution, another time they counted 2 hours short, hey that's money! After a few phonecalls, ge got those hours anyway, but it leaves a kind of strange taste. So now again they act difficult, and Jan heard from other flexworkers they also had trouble.
Well, I wasn;t happy with the answer. I think it isn't fair play.
But do you know I wass the most pissed off with?? That I should have a phonecall back, but that they called the agenecy! I don;t think that is the proper way to do things. But I think they didn;t want to have the discussion with a flexworker and left it to the agency. Still I think, it isn't very polite.
So now Jan decided that if the agency askes him to work for that institution he will refuse it. He can, no problem. Yeah, if every time he works for them there will be a problem with time, it's no fun.
Luckily he almost all the time works for another insitution and they are much nicer with the time writing, sometimes they even add 15 minutes or half an hour, because it was a harder shift or so, or they know a worker was later in than scheduled( and the flexer didn;t putt his extra time on the list). Now that is a way to deal with a staff.

ROFL, can you tell I was kind of angry??? I made quite a story of it, didn;t I? Well, I didn;t like the way it was handled by that instituion, kind of sneeky and a bit cowerdly.

Okay, enough of that now. With Jan at work in the mornings, last two days, I was more active too.
Did again a laundry, some dusting and a vacuum cleaning, washed by hand a little curtain of the kitchen, did some necesary shopping, prepared partly dinner, did some serious pruning in the garden, some ironing was done, so all together I am a bit pleased with myself. Oh there's more waiting to be done, but I take every day something, and that works for me at the moment. And it leaves me some computer time too, yeah.
Got a new kit ready for upload, and started on another too!
I think today will be a day "off", ROFL, Jan doesn;t work today, so it probably will be a bit garden time with this awesome weather we have at the moment, may be we even will take a little walk, I don;t know yet.

From Arlene today lovely clusters from the Discovery of Wonder kit. 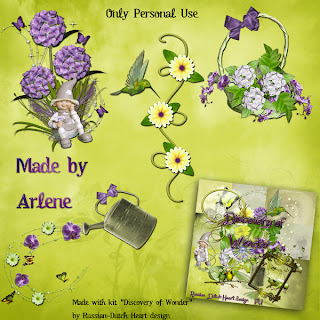 And from me a kit named "Light as a Feather".
Well, hope to finish today the other kit I started and perhaps even make a start with a new one wow!
Have a terrific day. 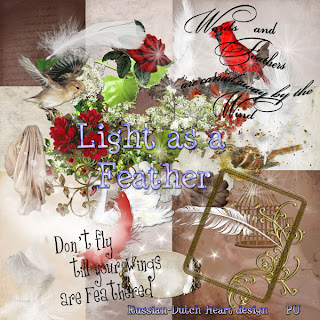 Another kit... another surprise!
The feathers are such a good idea, they make your kit look magical.
Arlene did 4 lovely clusters too!
Thank you so much for everything!
Have a nice day,
Florence

You have every right to be angry. Some companies are very stingy and downright dishonest when they think they can save some money. It's good that Jan can refuse to work for that place and not get in trouble with the agency.

Enjoy your good weather and your days in the garden. September is right around the corner. lol. You have a great day, hugs, Edna B.

Thank you so much for this post. I want to let you know that I posted a link to your blog in CBH Digital Scrapbooking Freebies (please, notice the new url for my blog), under the Page 14 post on Aug. 15, 2012. Thanks again.

Hello and Thank you for the lovely clusters and kit...
Linda

Thank you so much for this post. I want to let you know that I posted a link to your blog in CBH Digital Scrapbooking Freebies (please, notice the new url for my blog), under the Page 16 post on Aug. 15, 2012. Thanks again.

Ha, ha, ha! U tell them Kyra, don't let them gyp Jan of his hard earned money! I don't blame you, if you earned it, you should get it! Lovely weather here last evening, rained all night with lightning and thunder, good sleeping and much needed rain! Tired of the 100+ days, but we still have another 3-4 weeks of it in store! Thanx to Arlene for more lovelies and just dying to use the Light as a Feather so thank you so much for sharing! Have a great day! Hugs! Mat

MANY THANKS once again details on my blog
x

You are both busy bees. Thank you, Kyra and Arlene, for taking the time to share with us. I love your kits and QP's.