Our weather isn;t bad, although at the moment somewhat cooler, but still here and there sunshine, temperature around 20-21C.  May be later this week a little bit of rain, but it looks as if Jan has to water the garden today or tomorrow. It has been too dry.

It was quite a busy week this one. Monday and Tuesday we were busy clearing up several spaces in the rooms so the "curtain-Man"could get everywhere without too much trouble. Doing that it was great time too to go through some stuff and put things in plastic bags or cartons to get rid of . it takes several hours in the day and it absobs some energy but it is satisfying too. Oh. Monday Jan and I also [ainted the outside of the garden doors,  pfffff, we aren;t used to those jobs anymore LOL.So on Wednesday the man came to get rid of all the old rails and curtians and put on new rails and curtains. It takes several hours and it was one of the warmest days too this week. Gosh, you don;t need to do fitness when you have his profession. It is up and down stairs all the time, replacing it, and again and again.

He came around 9.30 in the morning and went away aroud 15.00 afternoon which gave us some time to put some tables and stuff back in it's place and give the rooms a good hoovering and oh my, it looks marvellous! I tried to make a picture of it, but it was not really good so I will try to make some new ones with some other lightfall perhaps. In a way the curtains make the sitting room a little bit darker, but the light that still comes in is very nice and we need to get used to it too. It really all lifts up all the rooms, pity only that one curtain wasn;t delivered, so that will be here in a day or 6-10 perhaps. The guy just will need to hang it on the rails, so that's done in a few minutes. It can happen, he was a bit cross on himself and blames himself for it, not having checked extra. But it was just before the holidays and it was a bit hectic in the shop. It is just the net-curtains for the bedroom, all the rest is done.

Can you imagine that after those 3 days we were a little bit pooped out? Jan also, but of course didn;t want to show, but i managed to let him sit down and take some rest, there wasn;t anything to do that couldn;t wait another day or may be two or even wait till next week.

Today I will make us a rather easy meal, a spring roll from the oven. It will be a rather big spring roll, looking a bit like this 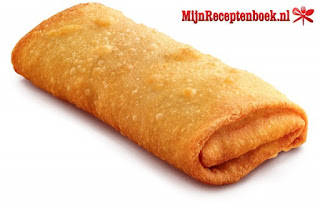 It will be filled with a lot of fresh veggies, fried quickly in a pan with a little bit of sunflower oil, also some fine noodles, rolled into some filo sheets, then in the oven for about 20 minutes and I hope they will turn out well. It doesnt look much but it is very stomach filling, and if you want you can add some chicken in it or prawns or whatever you want.

Good this was the news from this week, have a wonderful week and stay safe and till next week.

Posted by smiekeltje at 3:40 PM

I'm so glad that your new curtains are up now. Curtains can make all the difference on how the house looks. I'll bet it almost feels like a new place for you. Wonderful! That spring roll looks delicious. Lo Mein noodles would taste great with it.

Now that I have a new oxygen concentrator and I'm feeling so much better, I have a lot of things to do that I have been neglecting. I'd rather be playing with the yarn but I suppose the broom and mop need a bit of a workout too. hahaha. You have a wonderful week my friend, big hugs, Edna B.

So happy you finally got your new curtains. It certainly gives one a real good boost of happiness.
Our trees and such are all starting to sport their fall colours. Weather has been pretty good but a little up and down temps.
I enjoy reading what you cook all the time. It's so interesting to see the difference in your menus to the menus in my country!
Take care and stay safe.
Dawn