There will be some weather change for the better


I have to say just a few words about the disaster that happened In Christchurch, New Zealand. It is something beyond understanding. You can have different opinions, or believes, but to use just raw violence isn;t the way of dealing with it. And as long as people cannot get that into their mind, the world will never be the wonderful peacefull place it should be.
My sincere condolances and sympathie to all people of Christchurch and New Zealand.

Yes, we had some rather ugly days this last week with the weather. Most of it was caused by the strong wind, it made it feel a lot colder than it actually was.Then there were rainshowers(and some fierce ones too)added to it, so all together not my kind of weather. But there is hope appearing LOL.
Later this week the wind will slow down, may be 3-4 beaufort, so that isn;t too bad, and temps will go up again into double digits, may be even to 13-14C and with lots more sunshine too.
Yesterday it was the 16th of March and it meant that Jan and I were together for ...........27 years! So many years already, and they went by so fast.
It means that this year we will be married also already for 12 years. Gosh, now i really start fo feel old, ROFL.


It was a quiet week, as we have often these days, hahaha, but I still sometimes was short in time, how is that possible? Well, first of all I must admit I have slow starts in the morning, I wake up, have the morning stroll through the house, opening curtains, preparing the coffepot for later, preparing Jan's medisins for the day, making a cup of tea and then sit down to have that tea and look at the news on tv. Then a bit later I take something to eat, so that I can take my stomach pill, then there is a serie on German tv I just love to see, so you see, almost all morning is gone with little things. In a way i hate myself for it not being more active earlier in the day, on the other hand it is also nice to be able to take it that easy.
After seeing my serie(it isn;t a matter of life or death when  miss it a day, it isn'tas bad as that either) i get more active. I get dressed, put out of the freezer the meat I need for dinner, then go out for some shopping, coming home I sometimes take a cup of tea first, or if not right away start preparing for dinner, so that around dinner time I only have to put the gaz on and such.
After that I usually do some little job of cleaning, or ironing or whatever comes up or is necessary at the time, like making some phonecalls.
A day is gone quite quickly, if all goes a bit smooth, I might have an hour or so to sit at the computer for some designing, or sometimes just read the mail, and do a little game( at the moment I do a lot of Hidden object games on line).

Oh, I had a visit with my friend Heidi. It wasn;t just for having a chat and see eachother again, I also had to try out her spare keys of her house, because once I needed to use them, one of them didn't seem to work.
And this Saturday she asked us to take care of the dog in the early afternoon, give him a little walk so he can do his poopoo and such. They are away the whole day, so the poor little one cannot stay in the whole day, hey?
Well,  got at her house(she lives in a flat with entree doors protected, you can only get in with a key, and then you need another key for her appartement).
I tried the keys, no luck. Heidi came downstairs, tried them and the door opened. I tried again, no luck again. I got rather frustrated. I tried again and suddenly there was the miracle, the key got grip and opened the door!
I tried for security several times, it worked. The key has some problem to find the right "grip", but it works. Let's cross fingers it still will work on Saturday.
There's always a possibility to get into the hall, just wait for somebody to go in or out and explain what I am doing there and most of the time that isn;t a problem. Some of the residents already know me by face.
After this key-control business I had a cup of tea with Heidi and we could have a little chat. It was nice, because we didn;t do that for a rather long time. we do speak over the phone but it just isn;t the same.
I am glad to be able to say she is doing okay with her health at the moment. Although she still is far too busy, but that will not change from one day to the other with her LOL.

This is about all I can tell you. When I will be finished with this post, I think I will be sewing a bit(by hand, I don;t have a sewing machine, it is handy of course, but I do so little of sewing that I don;t see the need. And the things I do by myself are easy to do by hand), make a new seam in a pair of trousers to shorten it. And I might spend some time at the computer too.
Dinner today is easy, I have a left over potatoe salad from yesterday and I make a little steak with it. Quick. easy and yummie too!
I have a new kit for you, I named it You, the World and nothing else.
Have a wonderful week and see you next time. 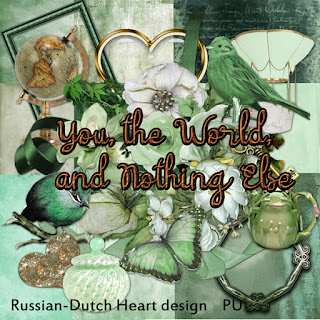 Posted by smiekeltje at 1:40 PM

Thank you so much for the new kit. I've been busy and I think tomorrow is going to be time to write on the blog. Thanks for the kits you do so well.

Thanks ever so much for the lovely kit, great title by the way! I, too, am slowing so much the day is almost gone before I get my wind and do things I need to do....LOL! We may not want to slow down as we get older, but our bodies just automatically do it for us. Our weather is slowly improving, then it freezes again, then it gets warm, then it rain, then the wind blows...but it is March (the windy month) and Spring is trying to march old Winter out of the way! LOL! I've been spring cleaning as much as I can and am almost through washing windows and replacing lighter colored draperies...etc. so, I am still able to do a few things for and by myself, just not as quickly!
I so agree with you regarding the disaster in New Zealand. Absolutely abominable and so uncalled for! My prayers and sympathies for all those who lost their lives or their loved ones! We all need to learn to share and live together in this wonderful world.
Again, thanks for the kit and all the news.
Hugs, Mat

You are quite correct, of course we have differences, there is nothing wrong in that. Thank you for another beautiful kit.

Hello and Thank you Kyra for this lovely download. Congratulations to you and Jan for being together 27 years.
There has been quite a lot of news on the shootings here too. It would be so good if everyone could get along peacefully without resorting to violence of any kind...

what a lovely title for your kit. Thank you so much. I downloaded it, now I can't wait to open it. It's so good that you and Heidi had a chance for a sit down visit. I've had that same problem with some keys. Eventually I get them working.

Congratulations to you and Jan and twenty seven years together. It's so nice to grow and be with your special someone all the time. I wish you both many more happy years together.

Pogo and I are home now and there is so much to do. I just do what I can and the rest will wait for tomorrow. You have a wonderful week my friend, hugs, Edna B.