Almost October! Can you believe it?

Yes, time goes as it goes, but it is a shame that we are saying goodbye to September already. We did had some days with rather nice weather, also days with less, most of it because the temperatures weren;t all too high. But you can expect that at this time of the year.
This week again we will start with temps around 15-16C, later in the week we may reach again 18C.

What did  do this week?
All the usual things, of course. Then i got busy in the garden, i did prune a lot of the ivy, really necessary!. It looks already much better now, but i think I will have to do another round one of these weeks.
Jan got busy on painting the two front windows, with one it was really necessary, because the paint began to come off. Now the window looks good again and today Jan is doing the second window.
So that will be ready for wintertimes.
I am a bit worried for Jan however. I have the idea he isn;t feeling 100%, but asking him has little use and he isn;t often speaking out about those things. Difficult man at times, believe me.
e said however that he though he was retaining a bit too much fluid, specially in his belly (and I don;t like that), with consequence he has gained a bit on weight. Not yet spectaculair, but he decided he would raise a little bit the mg. intake on one medicin(he has permission for that from his doctor). Now we must keep a good eye on his weight(and belly) and see if that helps. His next appointment with his doctor in hospital isn;t due till in November.
But let;s first see how the raise of the medicin works.

This week we will take our flu shot (our first). We though it might be a good idea to do it this year, with all the trouble we have gone through the last year. Better try to be as prepared as possible!

One thing however brightens my life for sure, and that is the start of a new season of Strictly come dancing on the BBC. I saw already the first two and it was great again. There are a few very good candidates again.I just love that program.

Still not very much birds in the garden. Perhaps there is one explanation for the parakeets. Jan read in the local newspaper that they found  a new place to sleep and that is in the middle of the city, around the government buildings(there is a lake, the Hofvijver and also quite some big trees around), so that might explain why they don;t come(yet) to our garden anymore. Their last "hiding"place was in a park, a bit closer to our home.
We will just have to wait and see during winter.

While I am at the computer, and Jan is outside painting, I though it would be nice to have some music(I do that at times when I am busy at the computer), but this time I put on some classical music, for now the Nocturnes of Choping. Beautiful music, so romantic. However I don't like all of them the same. Nr.1 is lovely, so is nr.2 and there are more.It also depends on the performing artist, every performer has his or her own interpretation, and it makesa big difference , believe me!
Of course  have lots of LP's with piano music, but I also like at times some violin, or guitar or other instruments, or just orchestral music.
But other times I put on some "modern"music, and I have many favourites in there too.
Music brings peace, happiness, it can be a comfort. It's is just something fantastic.

Okay, time to finish this post. I have a new kit for you. Lately I got several requests if I had the links for a Peacock kit. I did one a few years ago. Well, i don;t have a link anymore, I believe I even don;t have the kit anymore. To cut it short, I've made another kit, with a peacock theme, I named it Peacock's Sanctuary. I got carried away a little bit when busy on it, so it has become a rather big kit. That's why i decided to split it in two downloads. You get one today and the second next Sunday. Hope you don;t mind.

Have a lovely week. 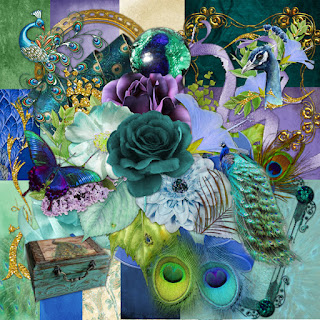 Posted by smiekeltje at 2:17 PM

I have been getting the flu shot since they came out and also the pneumonia shot (only needed once). I find it really helps despite the controversy. I have gotten the flu but it only is a mild case and that was only once.
Sorry to hear Jan may be experiencing problems again and sincerely hope upping the meds help. Yes, those stubborn men! Lol.
We have had some major frosts and cold weather-below normal. Sun and rain off and on all times. I am hoping we have some "Indian Summer" here as they call our mild spells in the fall.
Thanks as always for your beautiful kits. See you next Sunday. Cheers.

Jan is so good to keep the outside of the house looking good. I miss my brother. He always use to do these things for me. I'm sorry though, to hear that Jan is still having problems with his stomach. Let's hope the increase of the medicine fixes things.

So sorry about your parakeets. At least they are still okay. Most of our birds are year round. As long as we feed them. I have to agree with you about music. I love music, and it does give us a sense of peace and comfort.

You have a wonder day my friend, and enjoy your dance program. Hugs, Edna B.

p.s. What a beautiful kit. I love peacocks.

Thank you. I always love this color combination!

I'm apologizing for not keeping up with you. But I'm caught up now.
I haven't been feeling up to par lately. Still having problems with the intestinal situation. Taking lots of medicine but it still hasn't gotten under control. Comes from being 79 now.

Our weather is starting to really feel like fall. And it's raining in the mornings lately. Would be nice if the landlord would have the sprinklers turned off. One of them hits my little porch twice a day so I can only sit out there around noon to mid afternoon.

And I love peacocks. I'm looking for one to put with my 4 pink flamingos. I put Christmas bows on them last year and they looked splendid in with my other Lawn decos. Can't do anything this year since it's a rental property and he has strict rules. Good thing I'm planning on another move next May. I want a place with a fence so that I can put my puppy out there instead of having to tie her up for her trips to the 'potty'. But she has developed a time system and I didn't notice it until a week ago. I always take her with me when I go shopping. She loves it. But and it's a big but, if it's around 11:00 or so and I'm in a store she's does her #2 duty on the floor at the store. I didn't realize it until I thought back on the times she has done it and it's always about 11am or so.

Thank you for the new kit, I'll be sure to catch the 2nd part on Sunday. It's such a beautiful shade of Blue! Thank you.

P.S. I found that I hadn't saved the original kit so I downloaded it again. Did you know you have given us 21 kits this year? I am so grateful for and happy with your kits. After I get back from the store today I will be making some thing with a couple of your kits.

Thank you for your generous nature. You do beautiful kits.

Hello and Thank you for these lovely Peacock kits. I hope your friend Heidi is doing OK. I have been working backwards catching up again...