Jan in hospital for a few hours.

We had a quiet and very warm weekend. Not really temperatures that invited us to do a lot.
Today is much better, even a bit fresh, looking cloudy, it might rain a bit again. But from tomorrow temperatures will rise again to 77-82 F and a lot of sunshine.

This morning we were up very early, because Jan had to go to hospital for his vasculair research. I went with him, because I know he was a bit nervous about it. It's not such a big deal, but he doesn;t like hospitals at all, and specially not if he needs to stay for a couple of hours.
Well, I left him in good care there, I hope he has been picked up now to undergo the research.
After the MRI he has to stay for 2 or 3 hours there, lying, to avoid a bleeding. The infusion has to go through the groin, there they will inject some contrast fluid into his vains.
And then they want to be sure, after the MRI, that his vains closes well, and he will have no bleeding after it. Hope all will go well, and then he will be sensible enough to stay long enough on his bed LOL.

The news about the plain crash in the Ukrain is coming in in just little bits, they now know 193 Dutch people died in that crash. But But it is very difficult for the OVSE and officials to come near the crash place and do research on the bodies and the area and plain debris. All because part of that area in Ukrain is under control of the separatists.
I just hope for all families involved that the bodies will be home the soon as possible and then there will be the research to do to try to find out who really is responsible for the crash.
I am not sure if that will happen, but let's hope for the best.

As I said, we didn;t do or moved a lot around in the weekend. We even didn;t spend that much time in the garden, because it was simply too warm there.
Yesterday though it had cooled down a little bit, so somewhere in the morning I managed to vacuum clean the house(oh my, it needed to be done!!) and removed a few dust bunnies, and did a few other things.
Being so warm, specially on Friday and Saturday, I thought it might be a good idea to make a potatoe slad for Saturday evening. I made a mish mash of things, like diced potatoe, of course, then apple, cucumber, sweet and sour pickles and chorizo sausage, some mayonnaise and also some olive oil, balsamico vinager, tiny bit of mustard, pepper salt and it tasted good!
I had a left over from it, so we had that for dinner yesterday, together with a delicious  roast pork tenderloin, and I made a fruit salad for desert with melon, nectarines and strawberry.

I have a couple of photos, I promised you one of the new rose, sorry it isn't completly sharp, but you get an idea of the lovely color. 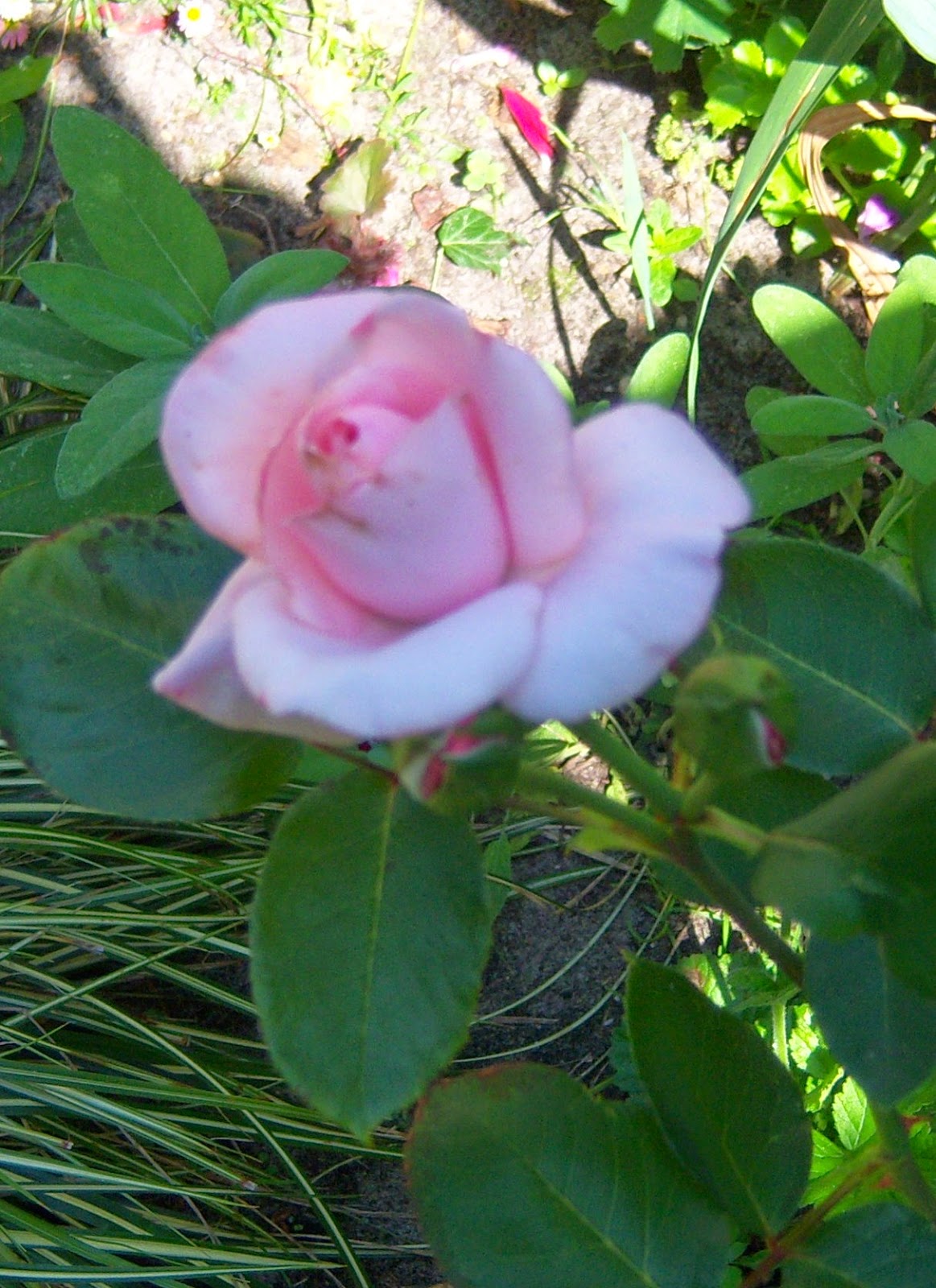 And here the buckets and two smaller planters I bought last week, you even see already one in use for a tomatoe plant. 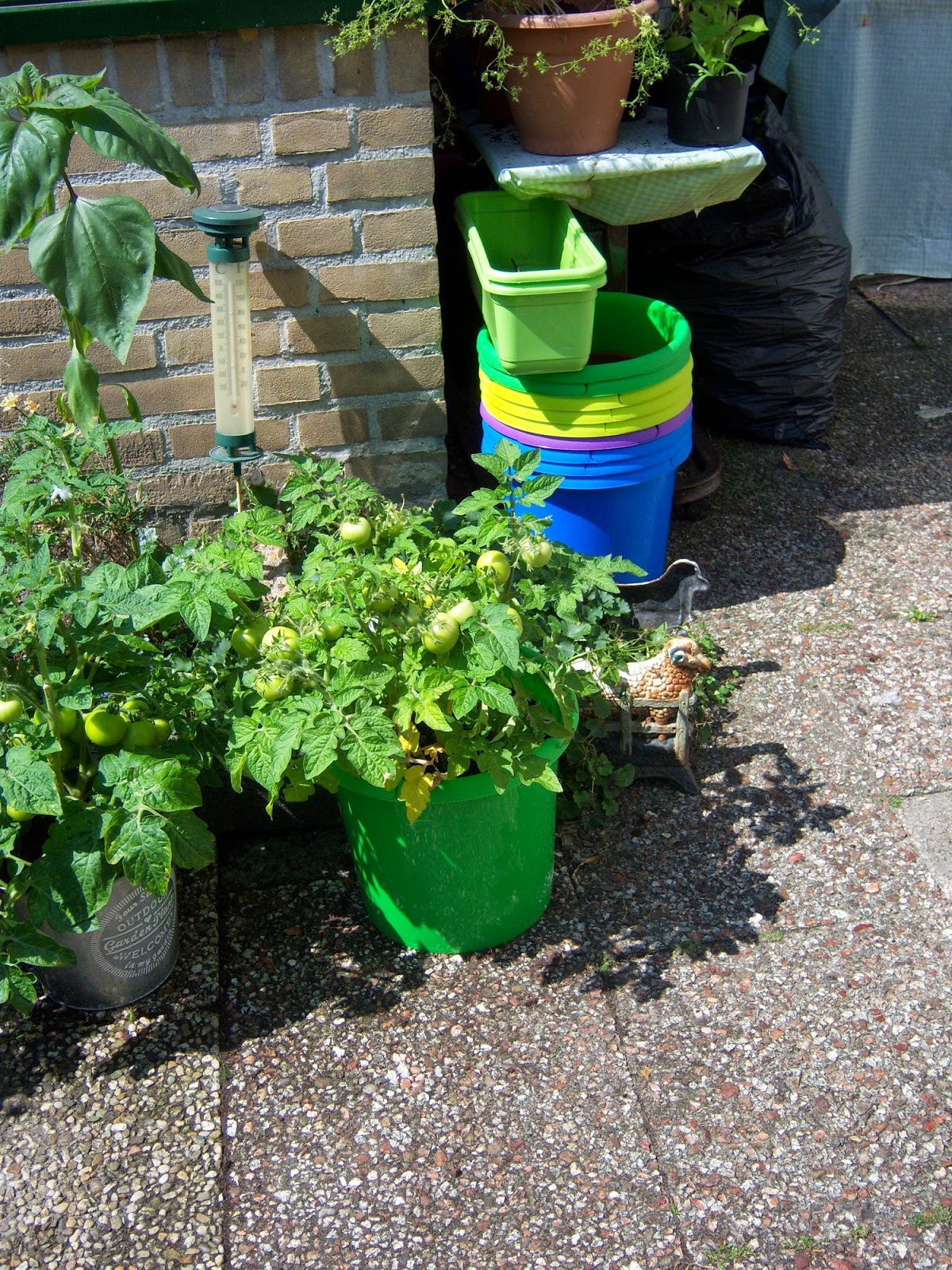 And here our Brodski, perhaps comtemplaiting about something, or just spotting something moving? 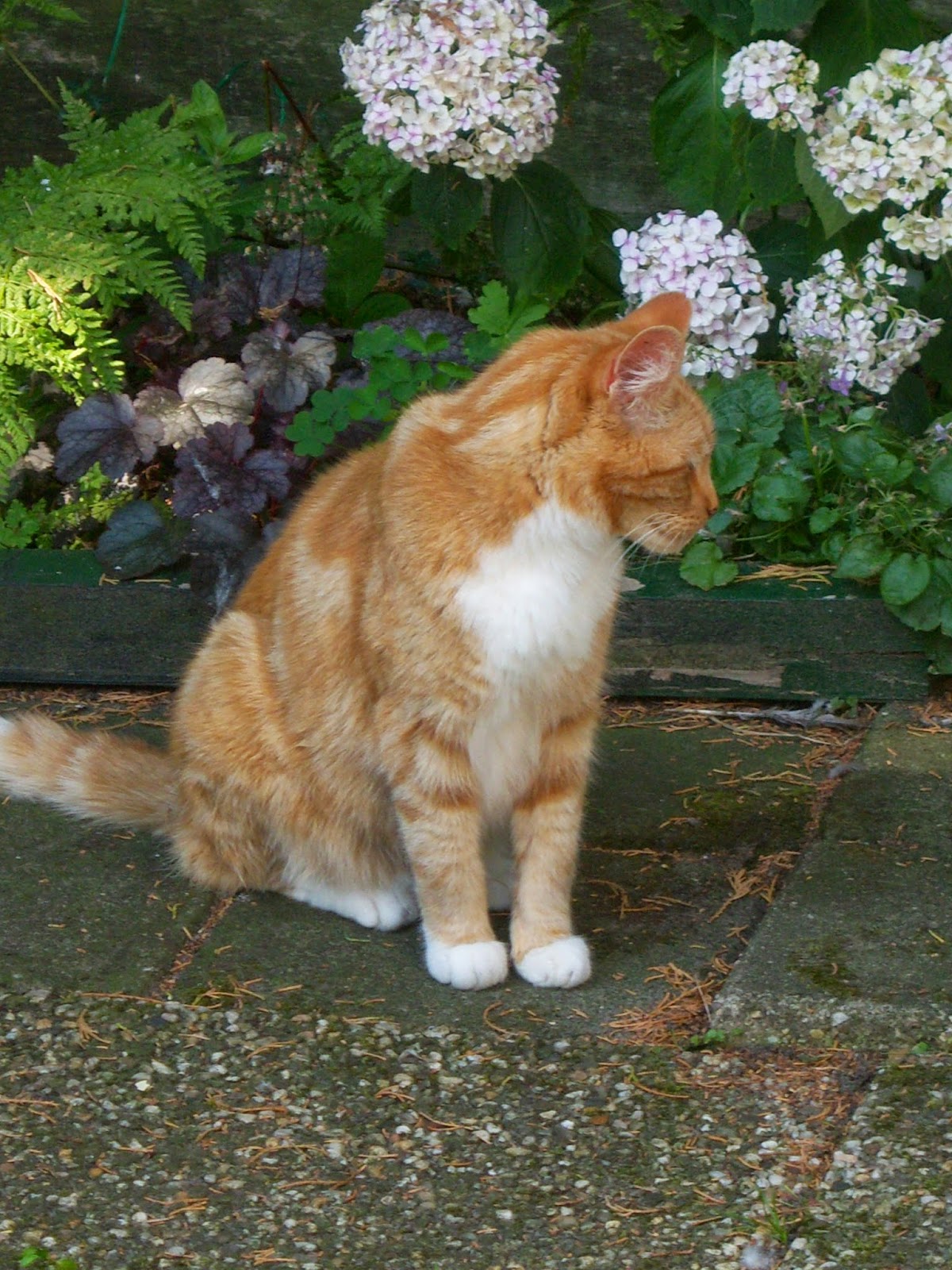 In a couple of days I hope to make a photo of our gladioles, starting to flower now, finally!

Your freebie today are the clusters Arlene made with the Foggy Summerevening kit.
Have a marvellous day! 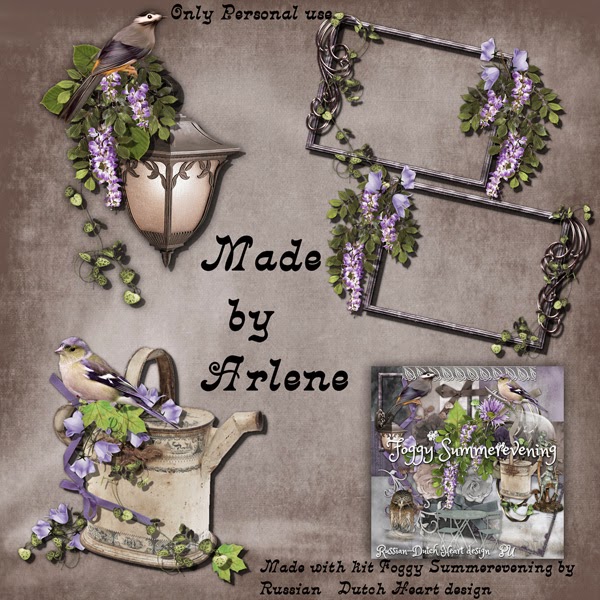 Posted by smiekeltje at 9:45 AM

Good morning Kyra:)
Just popping in real quick to see how things are going with You and Jan.I will be praying all things go well for him this morning!No fun waiting for test results.:(
So many people killed in that awful plane crash!! So much mystery surrounds it too. Not sure how much evidence can be found! Such an awful tragedy!
I am in a hurry this morning.Mama called yesterday and wants to spend the day with me today.:) I promise I will be back to catch up with your posts!

Your new rose is beautiful!!! Even Brodski enjoys sitting out in your garden. Using the buckets is a wonderful idea. One year, my daughter Audrey planted her whole veggie garden in buckets and it was one of her best years for crops.

We are hoping to make it to the park today. However, whether we get there or not, we WILL go outside for a while. It's such a beautiful day today. Hope your day is beautiful too. Hugs, Edna B.

Hello and Thank you for these lovely clusters Arlene and Kyra.
Kyra, I hope that all goes well at the hospital. Jan will have to take it easy for at least a couple of days. He probably won't be allowed to do any lifting or other heavy work.
Thank you for showing us your rose, it is very pretty...

Prayers sent your way for Jan that all will go smoothly with the contrast MRI.
Also prayers sent to your country for healing from this debacle in the Ukraine. They have been so disrespectful to the bodies of the dead! The photos and news we are receiving is not good, however, not too sure of accuracy of all we are seeing and hearing either, since they won't allow proper authorities in to investigate. Still it is a very tragic and sad situation and my heart aches for all the families of these innocent victims.
Thanks to Arlene for the lovely clusters you shared with us today. Hope your week ahead is a fabulous one. Hugs to both of you and oh yes, love the photos especially the one of Brodski!! :)

I've already used part of the kit and now I'll make another using one of the clusters from Arlene. Thank you both very much.

Thank you so much!