It finally is looking and feeling like spring here. We had some great days, and spent some time of it just in the garden.
But not on Saturday. Jan needed a couple of new trouwers, as he had lost weight the older ones are slipping of his bottom LOL. So Saturday we went to city centre to look for some new ones. And we found it, in the first shop we went into. How marvellous.
He bought two of them, and they were even for a real nice price too!
After we had those, we just went into a couple of other shops, something perhaps like |Wallmart, and oh good heavens, they had some nice seed packets, just for € 0,79 a piece.
Couldn;t let them go, so we bought one with six flower species and one with six herb species.
And yesterday we put them into pots, now we will have to be patient and see if anythinggrows from it.
Also re-arranged some of the pots, cause several plants needed fresh soil or more rom.
It was beautiful weather for it, so we really enjoyed being outside. And we weren;t busy all the time, no, also did spent some time sitting in the sun, reading a paper or garden magazine.

That was about all we did this weekend. Yesterday evening we watched, among other things, a special concert, attended by the new king and queen, because it was our Liberation day we celebrate each year(Livbration of the WW II), and there were some great performances.
On the 4th of May we have the Remembrance Day for all the victims f that war, but in the last couple of years included too all the victims, being soldiers or civilians of all the wars after WW II.
I think it is a good thing to remember what happened, ( in fact in a lot of parts in the world it still is), and honor the ones who fought for freedom, freedom we do have, but lots of others still don;t/

I think I will go to the market, just for a short time, we do need some cheese and perhaps some veggies or fruit. On the way to it I also can drop off a bill at the bank that has to be payed. But I will have to be strong when I walk at the market, cause they have a couple of stands there with so many nice garden plants!!!! Yet, I might see one for a real nice price, that just will fit in one pot we have, or just will fit in a little open space we still have LOL!

Before posting the freebie, I just have to give you the link to Linda's blog, she recently posted some beautiful quickpages again.
And wat better kit is there, than a Nutshell kit, named Primavera (Spring) ???
All in a green color scheme, and with two clusters from Arlene.
Now I will take a coffee and then hop under the shower and then go to the market, not too late, so I can do some "sun catching"in the garden later today.
Have a wonderful day. 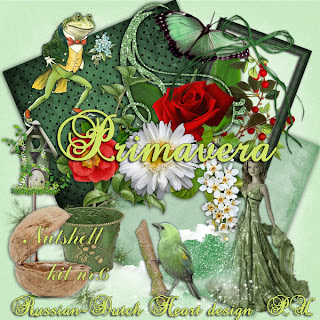 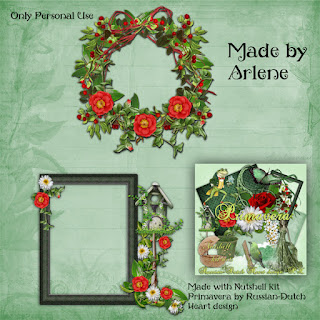 Another adorable kit. I love that frog! He has such character. It's good that the nice weather has finally settled in for you. Ours is beginning to settle too. Mornings and evenings are quite cool, but mid day is just fabulous! Have fun at the market, and it's okay to get one more plant. lol. Have a great day, hugs, Edna B.

Hello and Thank you for these lovely downloads.
Kyra, you and Jan have certainly been very busy in your lovely garden...

Love this NS kit and Arlene's offering too! Thank you both. I am glad your weather is finally cooperating. I have had all my windows open since 6:30 a.m. and have a kitty girl in each one...LOL! I was very busy yesterday and did not get to blog walk, so am trying to play catch up today! LOL! have a great one! Hugs, Mat

Love your new blog LO and the pretty green kit. Thanks again for sharing.