Hopefully one day the world will learn!

Not much happened here. Weather is okay, with mostly temperatures around 12-14C, one day a bit more filled with sunshine than another, but still not bad for the time of year.

Today in many countries there was 100th anniversary of the ending of World War I.! I watched some bits of it on tv, and it was very impressive.
This was a terrible war, with so many people killed, as well soldiers as civilians, and then you will have to count all the wounded, of which some survived, and many died after a short time.

World War One was one of the deadliest conflicts in the history of the human race, in which over 16 million people died. The total number of both civilian and military casualties is estimated at around 37 million people. The war killed almost 7 million civilians and 10 million military personnel.
Many people died, not from combat, but from diseases caused by the war, a figure estimated at around 2 million deaths. 6 million people went missing during the war and were presumed dead. Two out of three soldiers died in battle, the rest died due to infections or disease.

After such hard times, you might expect that finally people would have learned from it, but no, there still if war going on on our planet, and you wonder why it is so hard to live next to eachother in peace.
Leave everyone in his or her dignity, respect eachother,
accept that every person can have a different opinion, but that this should not be a hindrance to simply interact and live together!

Gosh, this is quite a "heavy"start of my blogpost. But we have to continue to spread this peaceful message, otherwise mankind will be lost totally.

On a lighter note though, I received an email of my niece in France. All is going well there, and she will be moving from the north of France to the south(lucky girl!). We don't have much contact, but every now and then we send eachother a little email, and that is a nice thing.
She is about the only family that I have(well, there are some distant nieces and nephews and so on somewhere on this world,) but she is about the closest.

I received some papers this week from my pension fund, I have to fill in a few forms, nothing much, so they can start paying my pension(it's the one I build up during the time I had a job) and that will be around the middle of next year. That done, another step is done towards the life of a pensionado LOL.

Oh, I also made a step towards Christmas package sending. I did wrap already a lot of presents, still have to look for one or two more and then I will have to find the right box.The one i have now I think will be just a little bit too large. I will find a right one, I am sure. Not far from our house there is a toy shop, and towards our Sinterklaas and also Christmas, they often put a lot of boxes in a small container. That all are boxes that came in filled with all kind of toys and they normally fold them flat, but during this time of year they are so kind to put out a lot of boxes of all formats outside the shop. So soon I will be able to search for the "right"box LOL.

Good, this is all there is to tell, I have for you a set of clusters from Arlene, made with the "In the Library "kit. hopefully next weekend I will have a new kit for you.
I wish you a wonderful day and week. 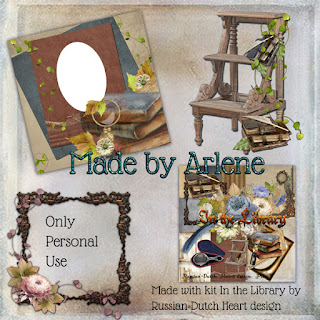 Posted by smiekeltje at 3:01 PM

I heartily agree that we need to educate our children about these past wars so that they won't forget. Hopefully, one day all of mankind will be able to live together harmoniously. Probably not during my lifetime, but hopefully during my childrens' or grandchildrens' lifetime. We can dream my friend.

Arlene's clusters are lovely. That stool is quite interesting. Thank you. I'm hoping to wrap a few things today too. The days go by so quickly, oh my. It's hard to believe that Thanksgiving is less than two weeks away. Wow! Where has the year gone?

I'm off now to see what sort of mischief I can get into. You have a wonderful week my friend, hugs, Edna B.

I've been really busy going through my electronic files and deleting the duplicates of Scrapbooks Pages I've done. I sorted them by Name of person in the page. Each has their own folder. then when I find a new file on the computer or on a thumb drive I can compare and delete the extra copies. So far according to my addition I've deleted over 10,000 items. I never kew when I was making backups of my computer that I was wasting a lot of space by having more copies of the pages.
I think I'm going to enjoy this new kit. I'm already liking the color scheme.
Happy Thanksgiving, if you celebrate it. If not have some turkey and think of me eating turkey, cranberry sauce and candied yams. Oh and Pumpkin pie.

Hello and Thank you Kyra and Arlene for these wonderful clusters. Kyra I agree with what you have said about all the wars, it would be so good if everyone could live peacefully...