Update on Jan: slowly getting better, although it differs from day to day. But he did went out twice this week already for a little walk and that did go rather well. Okay, he has to walk in very slow pace, but he could walk a longer distance than he thought.
However he still is having the fluid in his underlegs and I am still not happy about it. Well, later this week he will see his doctor in hospital and then we will see what she can say about it.
His weight is still keeping about the same, which is already nice.
All together taken, I think we cannot complain, considering in what state he was just a few weeks ago!

Christmas is almost there and this morning i already prepared a bit for our dinner tomorrow evening. We are having rabbit from the oven. The rabbit joints are in a marinade with some olive oil, garlic, lemon juice, white wine, rosemary sprig and some salt and pepper. will have to stir it several times today and then tomorrow I can prepare it in the oven.
Added to that some roasted potatoes from the oven and some Brussel sprouts and a bit of cranberry sauce, desert some Tiramisu. Well, I think we will have a yummie meal tomorrow.
And it isn;t too much work to make it.
It is however a pity that the post is letting us down. I know, Santa has sent us a box with some presents, but it didn't arrive till now. And I don;t expect, that the post will deliver today. Well, just hoping it will arrive later this week, and you know what? Then we can have an extra Christmas day, which isn;t bad either. Sometimes it is hard to understand how the post works. On time it just takes a few days to deliver something from one end of the world to another, and at time is takes sooooo long! Strange.

Weather here is rather mild, around 8 C, but it is grey and at times a very light drizzle of rain is falling. Not nice weather.
later this week we may have a tiny bit of sunshine, but then also temperature will drop to around 3C and perhaps little frost at night again.
Hmmm, don;t know if I am really happy about that!

Looking forward to this evening's tv. There will be a Christmas program of André Rieu from London and I just love his music and shows! Perhaps you are not familiair with his name, well, just look it up on Google, or perhaps better, on You Tube. If you like classical music but in a more popular way, than you are in for a treat. He also has great musicians and often interesting guest. Just give it a try.

That is it for now again. Only thing to do now is wishing you all a very Merry Christmas and already all the best for the New Year.
Hoping here that next year will be much more quiet(I settle for a bit of boring even LOL) and for all: spent in good health. 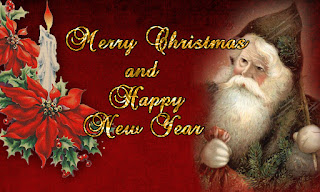 Posted by smiekeltje at 1:29 PM

Hello and Merry Christmas Kyra and Jan. It is good to hear Jan is still doing OK. I hope the tree branch that fell into your yard has been removed without any further damage to your plants.
I agree with you about wanting a quieter year in 2018 - a little boring sounds very good. I hope you both have a Happy New Year...

I'm so glad to hear that Jan is doing a bit better. Just don't let him overdo it. Kyra, I don't understand why the box has not arrived yet. If you don't have it by Tuesday, I'm going to have to ask at the Post Office to find out why. This makes me so sad. It was mailed the same day as the envelope.

Kyra, Pogo and I want to wish you and Jan a blessed Christmas. I am so thankful to have you for my friend. Your smile has brightened up many of a day for me. You are the only person that I know who has parakeets coming to her yard to feed. I think that makes you pretty special.

Today I'll be putting all the wrapping things away to make room for company who may want to sit a while. Tomorrow's dinner is all ready. I'm making stuffed shells. Mmmmm! I'm off now to get busy here.

You have a wonderful day and a very Merry Christmas. Big hugs and love, Edna B.

Merry Christmas to you and Jan. I wasn't on the computer much yesterday so didn['t see your post until this afternoon. We went to Jess's parents house yesterday and he had smoked a Turkey and made some white Chili. Her sweet potatoes got too runny but they tasted heavenly anyway.

Jess is making a Ham and mashed potatoes for our dinner today and I'm going to look in the pantry to see if I have a can of yams that I can nuke for us.

Tell Jan that he's doing it just right, not too fast so the body can get it's act together. I'll keep praying and Gott will bless him.

Hugs from around the other side of the world, (Washington state).
Corrine aka GrandmaSarge74@gmail.com

Hope this finds that you had a marvelous Christmas and everything is going well. We had a nice family get together and I even had my son here who hasn't been with us for a couple of years. So it was a huge treat for me. If I don't get to write again I wish you and Jan all the best you heart can hold for 2018!

Merry Christmas and a Happy New Year to you and Jan! It is so good to hear that Jan is improving if slowly. Let's keep praying that there are no setbacks and that the coming year will hold nothing but good health and contentment for you both! I know a peaceful and warm Spring will be welcomed by you and Jan both.

Sending love, friendship, and appreciation for all you do, Kyra. HUGS!!!!

hi hun, happy new year. Glad Jan is getting better, hope this year is a good one for you both xx