Not yet happy news to tell

I wished I had some good news to tell about Jan but there isn´t.
Last week it didn´t improve with Jan´s belly, so last Friday he went to hospital for bloodcheck.
Monday his doctor called on him to ask how he was doing. Well, he said it wasn´t good. He explained hopw all went, that he didn´t loose enough fluid, the belly was still the same size, he almost didn+t eat)he really lost fat, or muscle on all parts of his body except the belly, specially his face.)
So his doctor said to him that she would try to get him hospitalized as soon as possible, but that unfortunately she wouldn;t see him this week, because she had to go to another congres.
Jan said that she sounded not as nice as always, but that it had to do with the acting of the replacing doctor, well, so it felt to him.
We got a phonecall Tuesday morning that he should come in the afternoon to hospital. so that was quick.
I went to him yesterday and he already had a lot of tests done and it seems his doctor left behind a whole protocol of the things the doctors had to do for research and such LOL!
After all the tests they will see what could be best to do.
Perhaps another raise of the urine pills for a while, or may be something else and if nothing helps they might be doing a drain. But they don;t like doing it, it can be complicated sometimes.
But if it is necessary, well, let them do it. Jan has to get rid of that fluid in his belly, which is giving a lot of tension to the belly.
Not great that he is in hospital again, but on the other hand i am happy, because they do all kind of research now and that is already something. I think, they also will keep him longer hospitalized this time. Let them, as long as it has a good result!
So in short that is the situation for now.

You understand that nothing great is coming out of my hands at the moment. Of course I do the necessary things, but also that(the ordinary housework) is left alone a bit. I will pick it up again in a day or two, of course.
Weather isn't great at the moment Today we have stormy weather, with sometimes some rain. They say the storm will lie down towards end of afternoon. Hope so.
Temperatures are around 15-16C, not fantastic either. But the birds don;t mind. I hang up some food for them every day and yesterday when I was home from hospital visit again there were about 13 or 14 parakeets!!!! And then some tits and others too. Very busy LOL.
In the two weeks Jan was home again I even managed to finish a kit I was wroking on for already so long.
So  have it ready for you.! Name is "The Young Ones"and is kind of Victorian style.
Have fun with it.
As soon as there is news to tell you will find me back here. 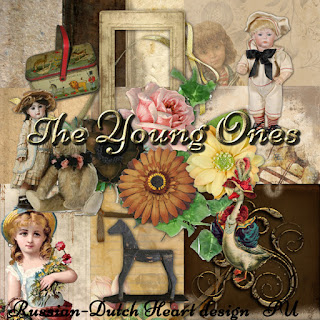 So sorry to hear there is sad news but like you say the hospital is probably the best place for him right now. They will do the tests and find out what is going on. Hugs to both and positive energy coming your way. Thanks so much for keeping us updated. And I love Victorian!! Thank you. We are having our Canadian Thanksgiving this weekend and can't believe how fast summer went by!

Gosh, you do have your hands full. So sorry to hear that Jan is back in the hospital, but at least they have the time to do all the necessary tests to find the problem. I hope he is felling better really soon.

Kyra, you take care of yourself. I know this is a difficult time for you, but you will make it through. If I were there I'd give you a big hug. I know you could use one right about now.

I'm so glad the parakeets are still coming to your garden. They are so beautiful. Sad to say, the only ones that we have here are in cages.

Your new kit is lovely. I'll see about making a quick page with it. I find that sort of designing very relaxing. Now I'm off to get dressed and wait for the burner clean out men. You have a great day my friend, hugs, Edna B.

((Hugs)) to both you and Jan, Kyra! Hope you get good news soon!

Thanks for all you do. Love and prayers for you and Jan. Hope things get better soon.

Hello my dear friend....so very sorry to hear about Jan and his troubles, hopefully he will get the proper treatment and be on the speedy recovery list! Illnesses when you get older are so very difficult to treat! Sending up prayers for the both of you! Hugs! Mat

ps...thanks for the lovely kit!

Kyra,
So very sorry to hear of Jan's stomach problems and his hospitalization. I really hope that they can figure out what is going on and get this taken care of. I know that it must be very frightening for the both of you, especially not knowing what all is going on.
I will pray that he will return to good health soon. Please take care of yourself as well.
Housework and scrapping kits can surely wait. Will be checking back hoping that Jan and you will have better news! Hugs, Beth

All the best and healing wishes for Jan. I hope that all these tests he has to get done will finally shed some light on what is wrong and that they can help him get better now. I know how much stress that puts on yourself knowing he isn't well, so look after yourself and get some rest as well. I hope you'll have some positive news soon.
Hugs Snowy

Gosh, I could swear that I posted a comment here the other day, but maybe my mind is just playing tricks on me. I'm sorry to hear that Jan is in the hospital, but at least maybe they can do a lot of tests and find what's needed to help heal him.

It's difficult to figure out how to spend our time when our loved one is laid up, but you will get through it. If you need a shoulder to lean on or just an ear to vent to, I'm here. I'll keep Jan in my prayers and hope that all will be healed soon.

I think spending time in the garden whenever possible is a good thing for you to do. The birds and plants can help to ease the heaviness of one's problems.

Now I'm off to wash up the supper dishes. You have a good night, my friend. Big hugs, Edna B.

Thank you so much for sharing a lovely kit. With all that you have happening in your life at the moment it's very generous of you.

Hello and Thank you Kyra for this lovely download. I'm reading backwards from the 24th October - you and Jan have certainly had a really rough time. I really hope you and Jan are doing a little better (writing on 28Oct2017)...