It wasn;t the best week ever. It started with me last weekend already. I was feeling not at ease, kind of tensed, restless, no, not nice. By Sunday evening it was gone more or less, so I was happy about that.
Monday feeling much better, not yet as it should be, but I could handle that.
I did some things like the laundry, a bit of grocerie shopping, little things, but okay.
Then Tuesday evening the phone rang, that was Heidi. She phoned me around 9.00 p.m. which is not a uusuale time for her, so I knew something was wrong and so it was.
That afternoon her husband Danny had a severe hart attack and was brought to hopsital and right away to operation room where he had a a coronary angioplasty. That went well and he was now on IC.Gosh, that was a shock, you could say.
I asked Heidi of course if I should come over, but she was kind of okay, and Séverine too, as far as you could expect in this situation. So I made an appointment with her that Jan and I would come next day, in early afternoon, to have a walk with the doggies, so she had her hands free during the day.
so we did. Jan went out with the doggies, I stayed with Heidi, so she could tell me all that happened. Also like kind of therapy for her, better to talk it out of your system.
She was very tired, didn't have much sleep, very understandable.
I told her I would come back next day again for the doggies in the afternoon.
So I went there yesterday, she was feeling better, had a good night sleep(well, at least she told me so), news about Danny was rather good. He would be moved to the ward and if all went well he might come home today. Then he will have to stay "put" for about 6-8 weeks to rest a lot and let it all heal.

After I came back home yesterday I right away went into the kitchen to bake two pirogi(kind of Russian pie, with minced meat). I promised one to Heidi, so one evening in the weekend she wouldn;t have to do much cooking. Just put on some soup(canned one is okay too, LOl) and with the pirog you have a good meal. And it is better then have some junkfood. I will bring it a bit later today.
The other one I made for us for tomorrow, I;ll make a little pan of soup and dinner will be quick but tasty.
Well, you can imagine this all made it a very strange week.

I am happy though, that it went well with Danny, but he will have to take more care of himself in future, probably looking in to his food habits, and for sure it would be a good thing for him to loose some weight.

Well, that is about all for this week to tell, but more than enough I say!
Let's end this post in a happier way, I have another Christmas kit for you, nämedd Christmas at the Countess and the add-on from Arlene at the same time.

Have a lovely weekend and stay safe. 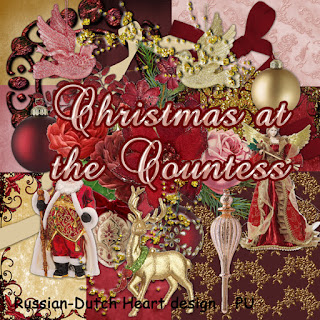 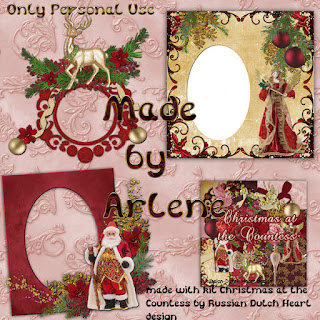 Wowie, that was really a strange week. I'll say a prayer for Heidi's husband and one for Heidi to have the strength to help him though this time. I did 24 sessions of Cardio Rehab (on the stationary bike, then on the thingy that works the upper arms and shoulders and tried the walking the track but the Osteo in the spine gave that up for me). It's hard but I pushed myself and managed to loose 22 pounds which I really needed to loose.Now it's just a matter of watching what I eat (lots of fresh veggies and made from scratch soup in the crock pot).

this is another beautiful Christmas kit. I thank you and Arlene, both very much.
Hugs and prayers for yours and Heidi's family.

Hello and Thank you Kyra and Arlene for these lovely pieces.
Kyra it is good to hear that you, Jan, Heidi, Danny and Severine are all doing OK. Things can change in an instant and turn people's lives upside down, it is good you and Jan were able to help out...

thank you so much for the gorgeous kits and too Arlene for the extras. I will be back to get the train, just don't have time right now. I am so sorry for Heidi and Danny, and I'll be praying he recovers quickly and can go home soon. You are so thoughtful, she has a good friend in you!

I'm so sorry to hear about your friend Danny. Hopefully he'll be well enough to go home, and will heal soon. This is quite serious. I think it's wonderful how you are helping Heidi. You're a really good friend.

Well, today Joe put up the tree out in the main part of the house, and this afternoon, I'll put up my little tree. I think I'll start sending out all my boxes on Monday. Hopefully, the rest of my cards will go out then too. I only have a few more to address.

I think tonight I can start the new green baby cocoon. I'll have to make this one just a bit larger. Baby Ali was a teeny one, but I don't know if the baby coming in March will be so small.

Well, Pogo is looking at me rather funny. I think he wants some lunch. haha. He is such a funny little character. Well, I'd best go feed him. You have a wonderful weekend my friend. Hugs, Edna B.

Good Morning Kyra & Jan! OMGosh what a terrible week for Heidi and Danny, glad he will be okay and you are such good friends to help them in their time of need. Sweet of you to bake for her too! That is what friends are for to be there through the rough times as well as the good. Thanks so much to you for the kit and to Arlene for her pretty share too! Love the look of your festive background too!
OK...this year has gone by way too fast, can you believe in 25 days it will be history? Hope all continues to improve over there and that all of you have a fantastic week ahead. Hugs my friend! Luv, Mat

OH my goodness! I prayed for Danny and will keep him in prayer for a speedy recovery. Please keep us updated on how he is doing, Kyra.

Thank you sooo much for your lovely Christmas kits! I wanted a kit with red but everyone seems to be in the mood for a blue Christmas this year. THANK YOU!!!

Hoping all is okay with you and yours! Just checking! Hugs, Mat

Thanks so much for sharing your scrap kits