Too bad we have to live in a paranoid worl!

Kind of late yes, but I woke up in the morning at a nice time and just sat on the couch with my coffee and watch a few programmes on tv and suddenly it was afternoon LOL.
Never mind, it's the weekend and there is no rush today.
Perhaps you wonder about the post title?
Well, that has to do with the news break we had yesterday. On the railwaystation of Rotterdam a Thalystrain(heading for France) was held up, because a young man jumped on it on almost the last minute and shut himself up in the toilet. No big deal, you would say, but several weeks ago there was about the same incident in Northern France I believe, and there really was a weapon involved (an Ak47!)and just because a few men were brave and overpowered him, a real tragedy didn't happen.
So of course when the incident in Rotterdan took place, all passengers were removed from the train police, military, search dog, helicopters, everything was there.
It took some time( Ithink too long,) to captured the young men, but then it showed he had no weapon or bomb or whatever and porbably had no harm in mind.
We still don't know whjy the young guy acted the way he did, seems there is a problem with language, so may be we will hear some more in a couple of days.
But I find it a terrible thing that at every corner of the street something could happen to you.
I am not walking around with that idea cnstantly in my head, but thinking about it it is kind of frightning. And these things make people paranoid, and sometimes too much.

Then we have another problem going on in Europe at the moment, and that is the huge amount of refugees coming to mstly Western Europe. Lots of them are refugees from Syria, escaping the terrible war that is going on there already for about 5 years,
In the surrounding countries of Syria, there are enormous camps, most with bad conditions, because those countried cannot cope with 3 or 5 million people extra!
So in a hurry several european countries take measures to recieve a lot of refugees, but it isn;t always so easy to give them a place to stay. it is a tremendous problem, but the politicians are to blame too for it. They could see it coming already for many years and as long as we don;t try to solve the problem at the roots, we will have to deal with large numbers of refugees. And I mean real refugees, running away for wars, life threatening situations. Yes, I feel really sorry for those people, leaving everything behind, not knowing if you will be able to start a new life, all you want is peace and safety and being able to live your life. And yes, we should help, even if it's  not always easy, but we never should forget the word " humanity". If we loose that, we aren't worth anything.
As long as there is a weapon industry there will be wars and that has its consequences.
Kind of funny really how the world works. On one side "we" spend millions on help to countried and charity organisations and on the other hand "we" deliver the means(read: weapons) to them.
Well I better stop moaning, I wouldn;t know a quick solution for the problem neither.
But that there has to change something is obvious.

Is there some more chearfull news to tell? No, not really, life here is pretty quiet at the moment, and I must say I love it, after all trouble we had the past months.We still have not all too bad weather, although it is not the kind to sit in the garden. we still have some sunshine, some rain too, you can notice autumn is coming near, you also can see it in nature. Trees slowy are changing their leaf-colors,
more and more plants finish their bloom, so in a few weeks it might be time to think about Christmas time again. Hahaha, no, I am nt up to it yet, but as soon as september is done with it seems that Christmas time is hurrying towards you.
For now I don;t want to think about it yet, I'd ratherr have some more really nice autumn weeks or even months, with not too much rain and wind and not too drastic dropping temperatures.

So time to finish the post, and leaving you with a freebie from Arlene, made with the Mode du Passé kit.
Have a wonderful weekend. 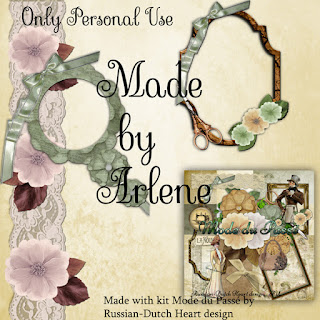 I agree with you about all the wicked news every day. I used to love walking at night. Not anymore. I don't even like going to strange places alone anymore. It's really sad.

I think it's a shame about the millions of refugees. But it leaves me wondering what made them all decide to leave at the same time all these years later. And I have to wonder how many militants are among them, posing as peaceful loving persons. Could not these tens of millions of people have overthrown their bad government and taken back their country?

I think it's a sad world when I have to think of these things. But of course, in today's world I have to think like this. I worry for my family and my country. Right now, we are so saturated with illegals, that we are struggling to keep ourselves afloat. At some point, where does it all end?

We are having some really nice weather now, and all next week will be in the 70's. Mmmmmm! I hope your weather stays nice too. It feels good to be outside.

Kevin's scrimmage game was changed from today to tomorrow. I guess the other team could not make it today. Oh well.

Pogo and I are going to have us a peaceful lazy day. I hope your day is super too. Hugs, Edna B.

My thanks to Arlene for the pretty freebies.

we also have had scares. One young man of Arabic origin made a clock for his suitcase and then took it to school. The teacher hearing the ticking took the suitcase, the scwas evacuated and the bomb squad was called. The student was detained until it could be determined that it wasn't an IED and because he was almost an adult he was treated as one and taken to jail. For his 'stupid' mistake of scaring the whole school he has been invited to the White House by President Obama to glorify his religion (Muslim)(same as the Presidents) and being misunderstood by the teachers et al.

Any way it's a troubled world we live in and a lot less news would be fine with me.
Thanks for the goodies and have a nice weekend.

thanks to you and Arlene, for the beautiful clusters! I want to enjoy the fall cooler tempatures. I am so not ready for Christmas.

Hello and Thank you Kyra and Arlene for this lovely download...

Good Morning! Last day of summer...someone should tell Mother Nature that...we hit 95F yesterday and expecting the same today! LOL! I want some temp drops and would love some rain, but NOT! Spent most of yesterday getting my mammogram and bone density tests done...they were so very busy....glad women are getting the screening though!
I have almost gotten to the point of not wanting to watch the news because of paranoia it causes...I no longer go anywhere alone after dark. Older people are real prey for the "druggies" around here. I know it is "something" all over the world. Don't know why we can't just all get along, but there is always "some group" that wants to be the "supreme" group and take from others instead of earning it...!
Thanks to Arlene for the lovelies and here's wishing you and Jan a terrific week ahead. Hugs, Mat