Oh, what a wonderful relaxed Christmas we had. And it was made ever so special with the gifts sent to us.
We managed to wait with opening them till Christmas day in the late afternoon!
and what fun we had, doing that. Santa was good to us this year again.
I've made you a picture of the gifts, but one was just the best for me, I will show you later in the post.
On Christmasday, I didn;t have to do much about the cooking, because we had a meat fondue and it was ever so yummie, and there was so much left, that we had it the second day too.
For desert, to squeeze into the last bit of space we had left in our belly, I;ve made two apples in the oven, filled with sugar, cinnamon and raisins, and a bunch of whipped cream. Next day I had stewed pears.
First will show you another part of our Christmasroom, I think I've made that on Christmas eve, so can still see the gifts under the tree, and if you look well at the left you see a little part of Jan, sitting on the couch and doing one of his crosswords. 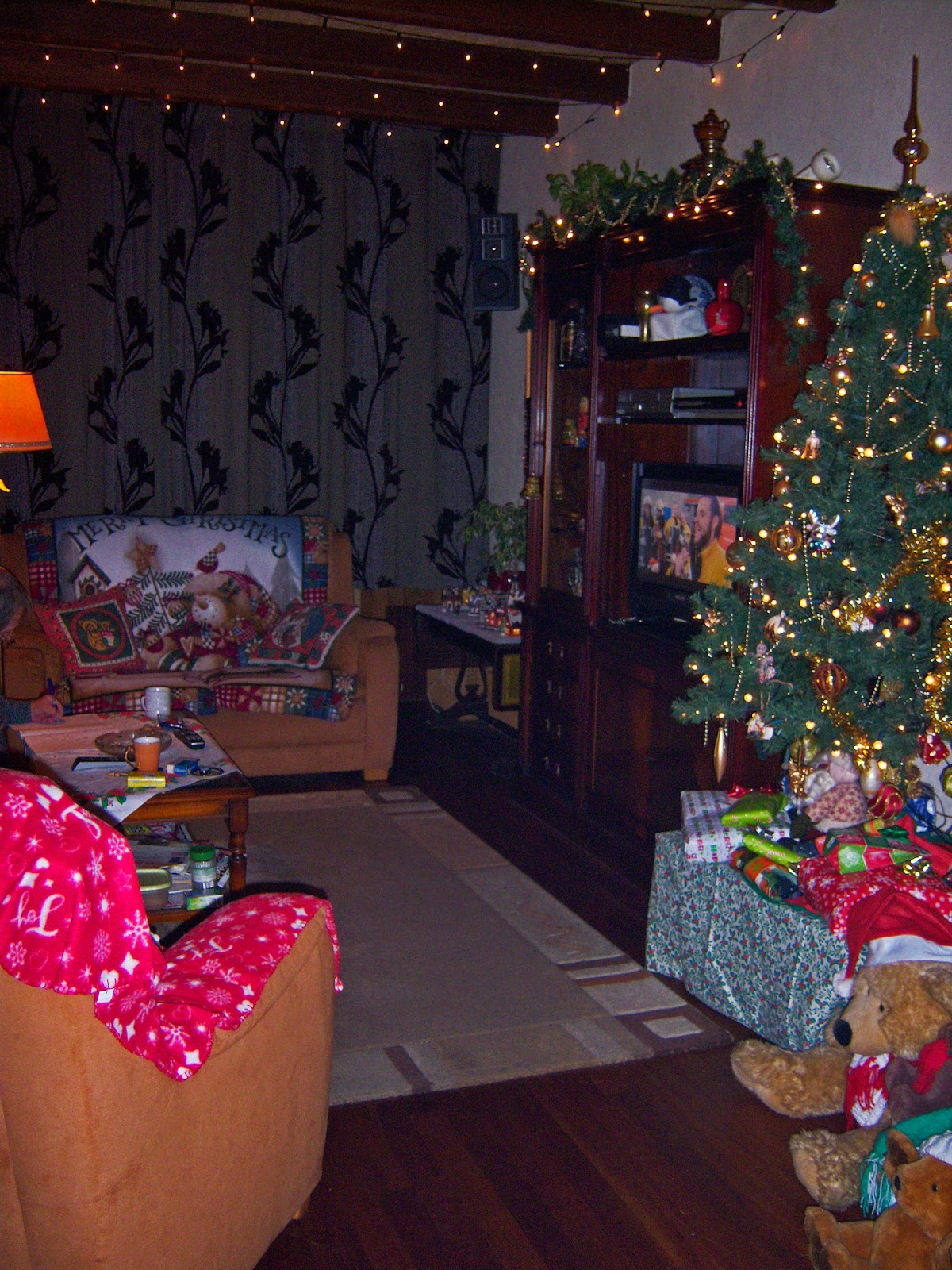 Now here I've spread out a bit our gifts, with the stunning undress, all of soft fleece and it came at such a good time, cause my old one had become really old. On the right you see a blue sweater Jan got, and he even got two, all so comfy. Even Brodski got his little gift, oh yeah, Santa thought about all of us LOL! 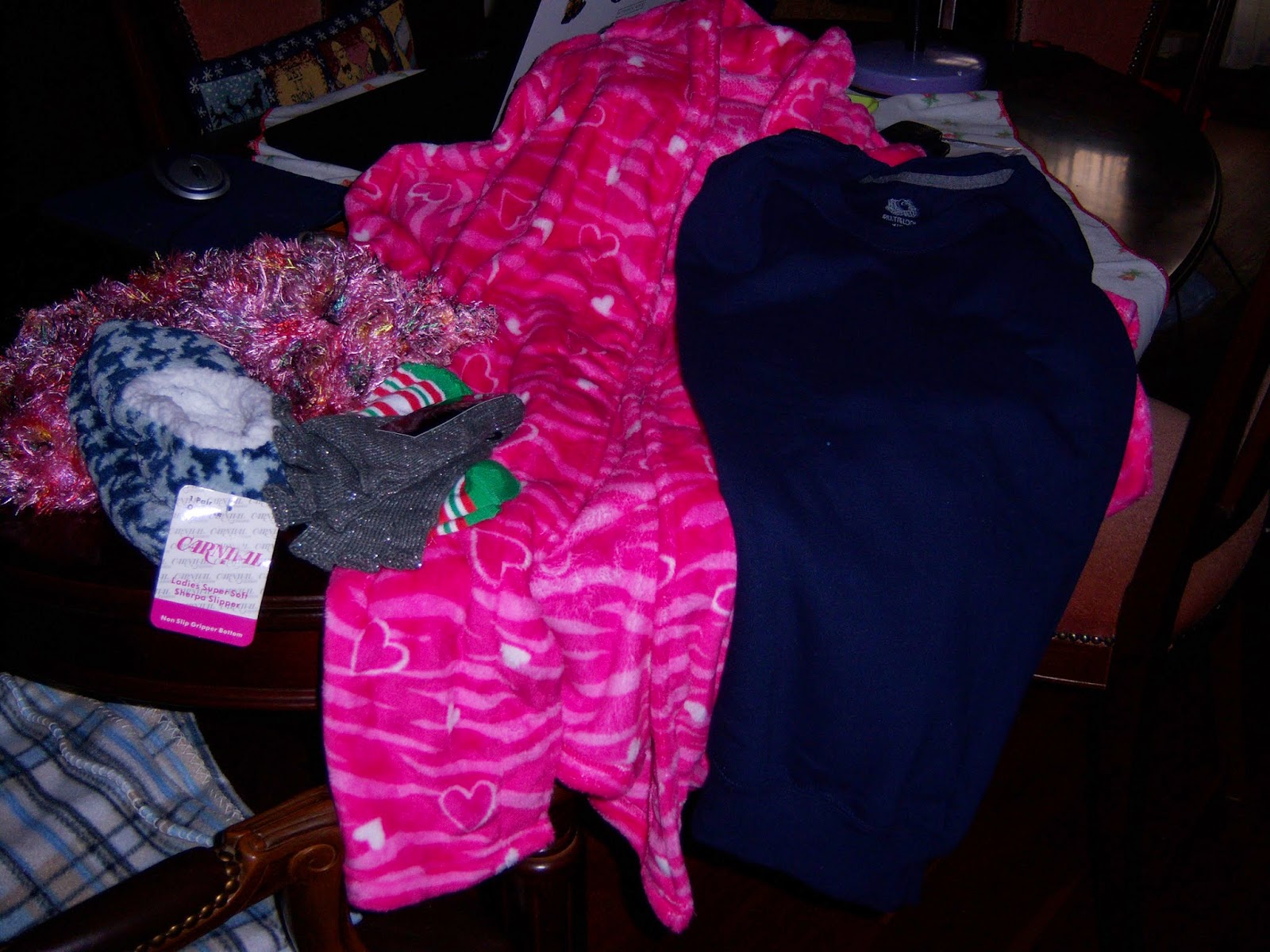 And this was the best, this T-shirt, look at it, with the picture of my  blogprofilephoto! How amazing is that??????????? Oh golly, it really brought a big l;augh unto my face, and on Jan's too! 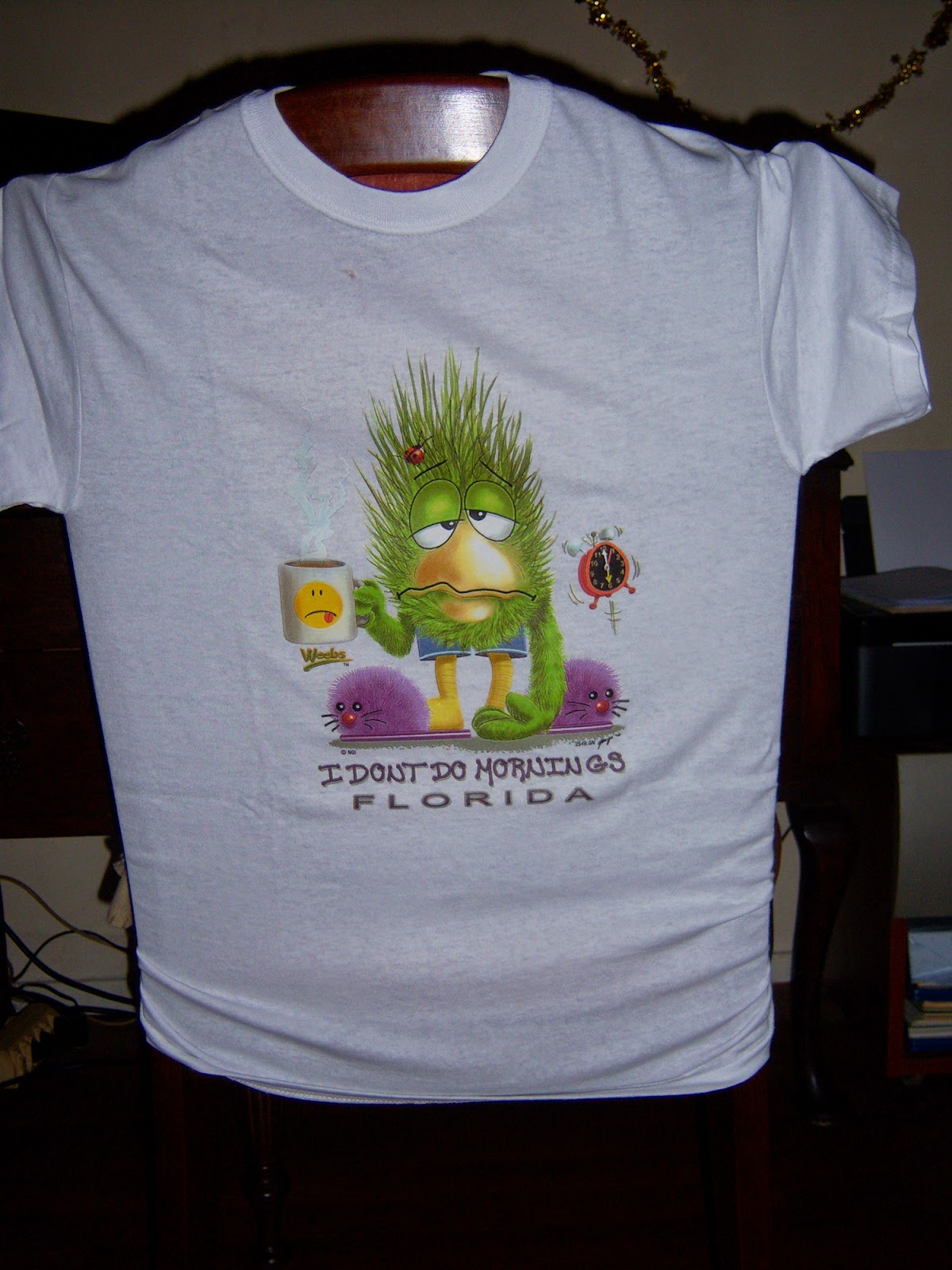 And of course I couldn;t resist taking some photos of Brodski in and on "his Christmaschair" 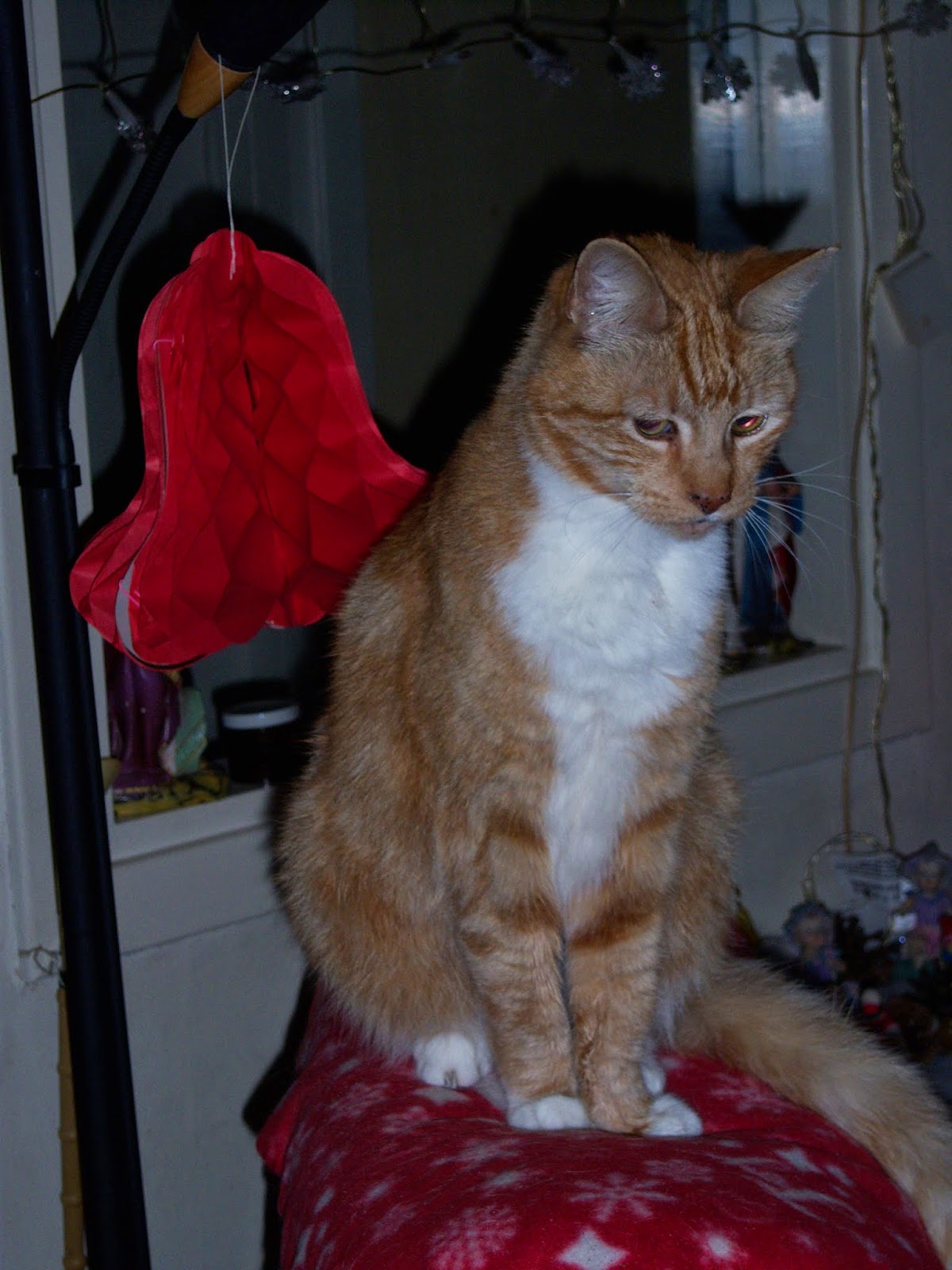 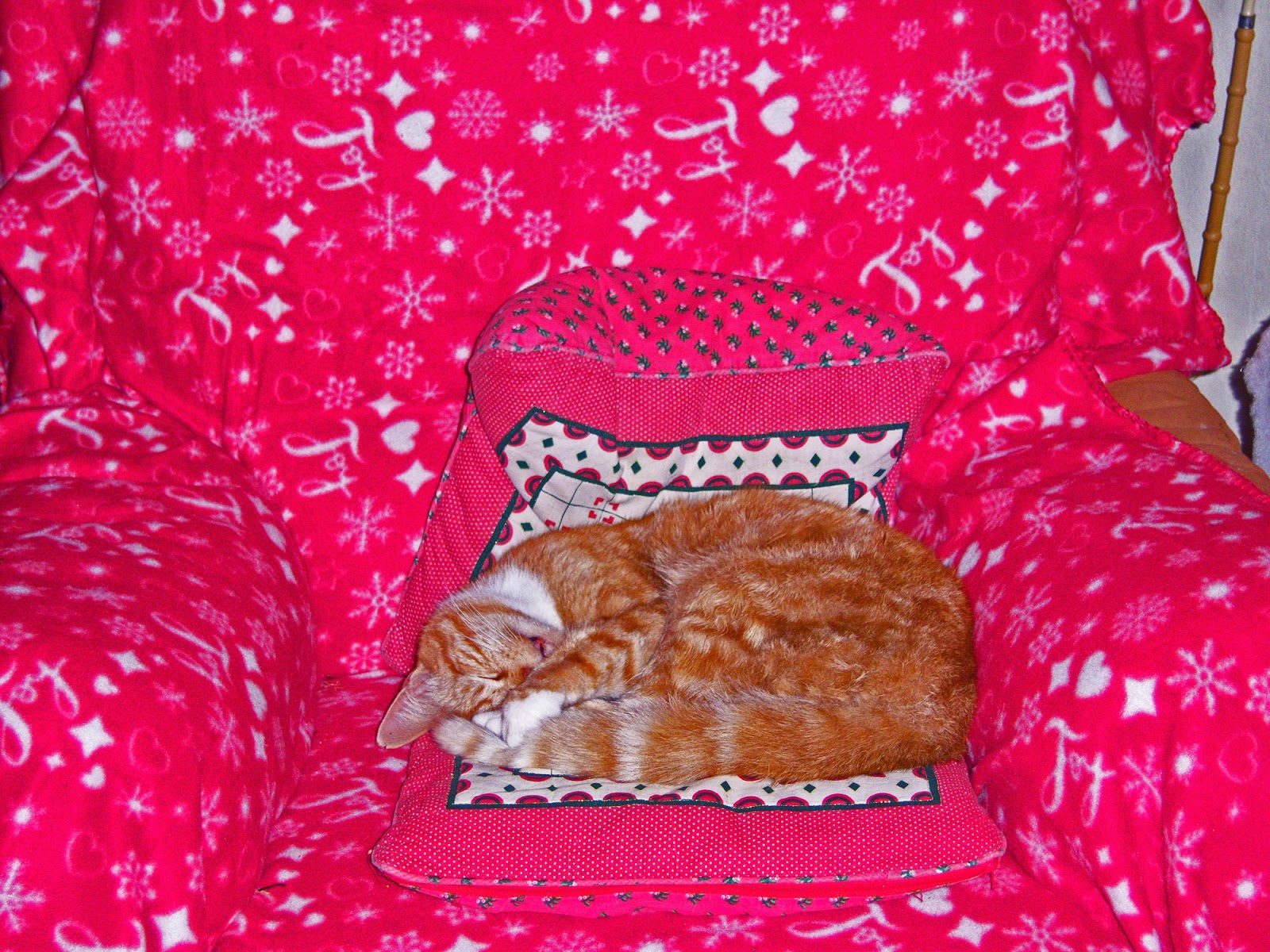 Then this morning I got a little shock. When I wake up, first direction is into the kitchen, to put on the coffee and  took a look into the garden and it was white!!! Over night or early in the morning it snowed. I must say it has a charm, but I like for an hour or so and then I want it to disappear again LOL.
But it will stay colder the next few days with even some frost during the nights, not much, but it demands a bit of adaption from us. We were so blessed with rather high temperatures even in this moth, so this is a sudden change.
We will survive, don;t worry, but I hope it will be done with in a few days again.
Can you believe we are almost at the end of the year again? Much has happened, not always the best things, but we keep hope that perhaps next year we will have a little change for the better. Despite of some more difficult times, we still can be thankful for all we have, there are a lot of people around this world who have real difficult times and poor circumstances, far away as well as in our own country. So we shouldn;t complain too much( but to do it sometimes, it relieves the soul LOL).

Now soon I will have to get dressed and be brave and get out for a few things, like some bread, newspaper, and such.Brrrrr, I will dress warm, and have warm boots on  and although it might be colder, it will do good to sniff some air again.
I have a little kit for you, named it Precious Winter Green.

Before leaving you, I want to thank all people, who left us such warm wishes here on the blog or by mail. They are really appreciated, and added to a really good Christmas feeling.Thank you, from all the heart.

Goodbye for now, till Monday again! 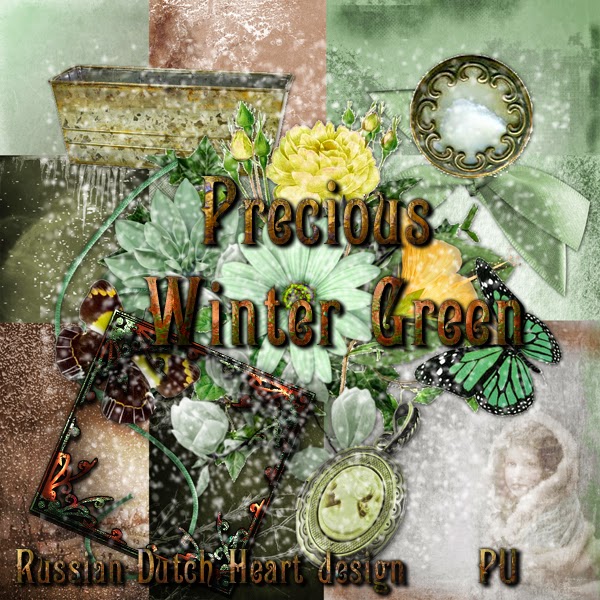 Hello and Thank you for this lovely download. It is good to hear you had a nice Christmas Day...

I'm glad you had such a beautiful Christmas. and you got some snow. I've haven'ten any yet but it's a possibility for today or tomorrow. I live in the 'high dessert' so a lot of moisture in any form is a small miracle. But I can wish!!

Thank you for another kit to play with.

I will have to round up all the pictures from 3 different web mommas. It's complicated but I dearly love them all. It's awfully quiet now with just myself and Olivia. Will be looking for more pictures of this beautiful girl.

Kyra, this is such a pretty little kit. Welcome to the snow! So far we've been lucky. whatever snow that has fallen has disappeared really quick.

My Christmas present from Pogo arrived in today's mail, and oh it so pretty. He is soooo good to me!!! lol.

Today the sun is shining and there is very little wind. A super beautiful day!!!

Your Brodski looks so handsome on his chair. He seems quite pleased with himself.

Today, Pogo needs to try on his new sweaters so that we can see what fits. If I'm lucky, he'll pose for a few photos.

Here's hoping your snow goes away soon. You have a wonderful day, hugs, Edna B.