Yes, we had at the same time a lazy and also busy weekend. How come?
well, there were the World championnships speedskating for allrounders this weekend. I almost forgot about it. Good that Jan remembered!
As you know I am a fan of watching this sport, you can imagine that we were busy doing nothing else than watching the event.
It's a loooong seat, two days, all afternoon, but it's great. And it was worthwhile, because I can brag now LOL.
We have 2 Dutch world champions, one with the ladies and one with the men, and with the ladies even the second place too!.
So I had some plans for the weekend, but they didnlt work out because of the event.

Friday I did some stuff in the house, so that was a good thing. And in the mornings on Saturday and Sunday I even did some designing. Also had to make a couple of previews for clusters Arlene made, have to make one or two more, and then figure out a new kit. Well, most of the times it is best to just find a colour pallette and then just start, and during the "proces"the idea grows for the kind of kit.
In earlier days I worked more with a theme in mind, which is necessary sometimes, but it's also surprising and fun to see what comes out of the blue. For the moment that works best for me.
I sometimes even have already a name for a kit and work it out from that.

With the "crisis"going around almost all the world, lots of debats are started again about the salary and bonusses that are given to bank directors/managers, or directors/managers of other businesses.
This morning I read on teletext that a director of a firm in Switzerland was leaving and will have a leaving-bonus of.58 Million Euro! Can you imagine the amount of money that is?
Of course he said that a large part of it will be given to charity and such,  what a nice gesture !!
He received a salary in the 11 years he was there of about 240 million euros. I think he worked with a pharmaceutical company. Well, he only had to promise he wouldn;t work for another company like that the coming 5 years. Why bother????? He doesn;t have to work anymore at all, he just could take some job he likes as a hobby ROFL!
I don;t think that are normal amounts of money anymore.
Take away those insane bonusses from several big guys and I think a lot of countries could repaire their budget deficit easy without having to cut back on social health, house building, raise rents, business taxes for small businesses, raise taxes for the citizens, cutting back on the pensions for the elderly etc.
May be a naive thought, but it surely could help already a lot, with probably the result that people would get a bit more confidence in the economy again, would be able to spend a bit of money again, which is good for businesses again etc.

Good, I got of the steam again, hahaha, better to forget about the whole thing, because I cannot do anything about it, which is a pity, but reality.
To start off the week I have a nice kit for you, "Tranquil Moments". Great clusters from Arlene, so hopefully you can do some lovely things with the kit.
Have a great day! 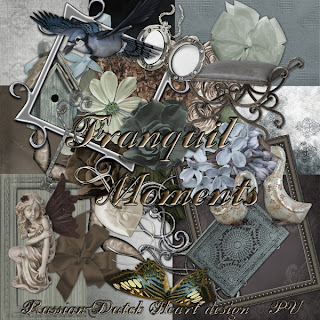 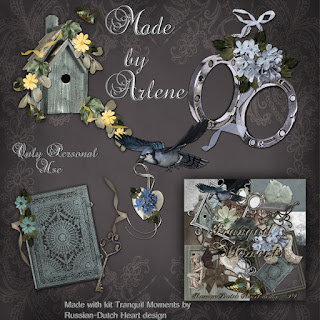 Good morning Kyra. I have to totally agree with you about the huge salaries that some executives get. It's actually quite obscene. You're right. We probably could solve a lot of financial woes if the money were put to a better use.

Congrats on your speed skating champions! It feels really good when the local guys win. Who knows? Maybe this year my Red Sox will win too. lol.

I'm at work, so gotta go. Mrs is waking now. You have a wonderful day. Hugs, Edna B>

Good Monday Morning! It is President's Day here, so lots of folks have the day off! Nice this morning at 58F but the wind is very strong and will be blowing in some thunderstorms later in the day! We need the rain so no complaints from me as long as they don't get severe!
I, too, watched some speed skating this weekend as well as the time trials for the NASCAR Daytona 500 for next weekend! The winner for the #1 pole position, Danika Patrick, a female ran faster than all those other guys!! Yippee!! LOL!
I took a break from computer after helping my boss to finish up things on Friday! She left Saturday morning for 7 weeks in India! I hope with allowing my neck and shoulders to rest a little, I can feel like catching up some with my scrapbooking!
Thank you for this lovely kit and thank Arlene as well! Have a lovely week ahead, chat more on Wednesday! Hugs, Mat

Love this kit! Thanks for sharing!

blessings and many thanks for these wonderful gifts ,hugs Nana Kat

Hello and Thank you for these lovely downloads.
I have to agree that some people get paid ridiculous amounts of money and the money could be put to better use.
I hope you and Jan have a fantastic week...

Thank you for Tranquil Moments. It's just what I need - perfect!

hello Kyra ! thank you for this lovely kit :) NathL