First: HAPPY NEW YEAR TO ALL OF YOU!
WE HOPE FOR A GOOD HEALTH, SOME FUN THINGS, NOT TOO MANY WORRIES, SOME LUCK, MUCH CREATIVITY.

Thank you all for the good wishes, if only a few percent come true it could be a great year.

Well, finally the hoidays are done with. Looking forward to them for quite some time and then in a rush all is over. It's already the second day in the year 2013.
Our New Years eve was a quiet, but great one. Poor Brodski wasn;t the most happy one LOL! Poor cat, he was a little bit stressed, although it wasn;t as bad as I thought. He is now on the couch, trying to get some rest and good sleep after the noisy days.
At mindnight we looked from the window at some fireworks, some very beautiful.
Then watched on dvd a detective and then went to bed. New Years day I was up a bit later, okay, no harm done. With a cup of coffee we watched then the New Years concert from Vienna, and did nothing at all for the rest of the day LOL!

But now it's time to pick up usual life, which means certainly to sweep the house with the vacuum cleaner for a start. And I think it will be a good thing to get out for a moment, we need some refill of the fridge and so. The weather looks not bad at all, I see blue sky, sunshine and almost no wind. How lovely is that ? And temperature isn;t bad either for this time of year: it will be between 46 and 50F at daytime, not really much wind, periods with sunshine, and little rain. I can do with that till springtime!

First concern however is to get Jan back in shape again. He still has problems with his back, some days are good and then suddenly it's hurting again, probably because he made a wrong move or so. But you know him, a doctor or fysio is no option, at least not yet.
His water retention is still there, but it's going better, although in very slow motion. Because of this annoying thing, which lasts already two months, his condition is almost zero, he isn't doing too much, which I can understand. Still very tired. Some days are not too bad, then he has a kind of "fall back", all is going in a yoyo effect.
Well, in about 3 weeks he has to go back to his doctor, hopefully it will be better with him then, he wants to go back to work, but for now it's not a good idea yet. He has not enough power in his body yet.
But.......it's a new year, with new chances, and new hope and we hold on to that.

I am worried a bit about Arlene too, I didn;t hear from her for some time now, and I am afraid she is having a rough time now, concerning her sister. Her sister wasn't doing very well, was or still is, in intensive care and it isn;t looking too good. And in those moments you feel so helpless!
Only thing we can do is sending up a little prayer.

Well, I think I have said all so it is time for the freebie now.
It's "Shadows of the Past", I think a versatile kit, with some lovely clusters from Arlene.
Have a wonderful day!! 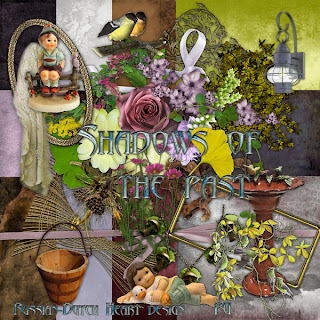 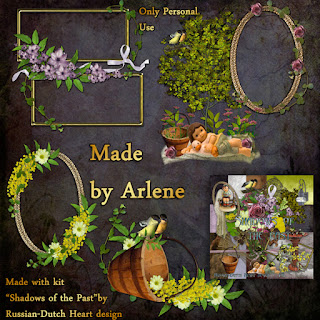 Happy New Year Kyra and Jan! I hope Jan's problems are soon healed and he is back to work again in no time.

I could do with your weather at the moment, ours is going in the extreme....we are expecting temps up to 44C in the next week.

New Year here for us was quiet. We stayed in and watched the fireworks on the TV, Not as good as in real life.

Hello and Thank you for these lovely downloads...

Good Wednesday morning and Happy 2013! We all have a chance now for another fun, happy, healthy, wealthy, creative year indeed! I plan to make the most of it and know you are too! I hope things look up for Jan real soon health wise!I am sending up prayers for Arlene and her family as well. The holidays is a really bad time to have family illnesses!
Thanks for the lovely kit and of course, for Arlene's contributions too! Have a great day enjoying your lovely outing! Hugs!! Mat

spended a sweet New Year Eve too, quiet one :)

whish you a sweet year too for all of yours :)

oh! forgot to say : what a beautifull blog layout you made! love it :)

Beautiful as always, and ty for this great kit!! ":)

Lovely kit and clusters! Thank you.

Gosh, I wish we had your temps too. It's cold here, but hopefully will warm up just a tad bit next week. I hope so.

I hope this new year will bring new healing for Jan and for Arlene's sister. I hope that Jan will find his brother well.

I hope by now that Brodski is feeling rested and much more relaxed after the festivities of the New Year Holiday. This can be very stressful for many pets.

I'm off to make a cup of coffee. You have a fabulous day. Hugs, Edna B.

Oh I love these cluster frames, they are gorgeous! I do feel for you and Jan, it is not nice nor easy when suffering an illness. I know, as my fiancé has restrictive cardiomyopathy, and we get very down at times. We did have a great New Years day though, we spent all day snuggled up in bed watching movies! Let us hope this New Year brings a lot of good luck for us all! x Sally x