Can you tell which holiday will come first?

Things over here are about the same. Jan is going to hospital for a bloodtest, his doctor wanted to have for the appointment tomorrow. I told him I am going with him, he didn;t like it i announced it, but pitty for him. I want to hear it all LOL.

I just came from reading Edna's blog and you should take a look there, because she has a fantastic cartoon there. Then I agree with Edna about this:  all stores start sooner every year displaying the holiday stuff!
Like here in Holland, already some weeks ago you could find lots of candy and wrapping paper and such for our Sinterklaas, which is only at the 5th of December! And almost at the same time you see already all kinds of things for Christmas!
So who could tell which holiday comes first? I think it is a shame, and it also takes away a bit the excitement for the holiday to come, so long before the actual day you are already confronted with it all.

But we are a little bit the same, we crapbook designers LOL! Although we do it different, we start some time before preparing our Christmaskits, which is logic, you need some time for it, still we act different: We keep them stucked away till around the start of December, although here and there you can already find Christmas stuff offered.
Also understandable, if you want to make cards for it yourself, to send away.
And this was just an introduction to give you the link to Linda's blog, who offeres you already two lovely cards to print!

I am late today, slept longer than I wished, but....................it was nice! So morning is almost done with, meaning I have to get moving and do something around here. Just will wait till Jan has left, then I can go with some speed all over to dust and wash and such.
And in the mean time keep an eye and ear from time to time on tv, cause the new government is under attack in the parliament. Great, not even started to govern, already problems to push through their wonderful plans(read that last as NOT SO GOOD AT ALL, at least, large parts of it.
But it will end, that everybody agrees more or less with it and who will pay the bill?
Yes, we common people, and specially the ones who already have difficulties getting through each month! Sigh, isn;t that always the case?

To birghten everybody up a bit I have another kit and clusters for you.
The kit is named "A Poet in the Afternoon".
Make some great layouts with it, but why say this, I know you will!
Have a great day. 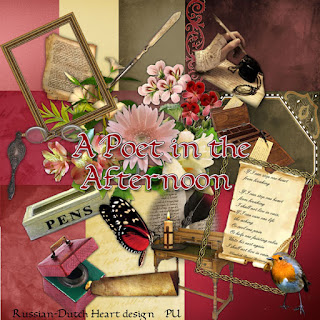 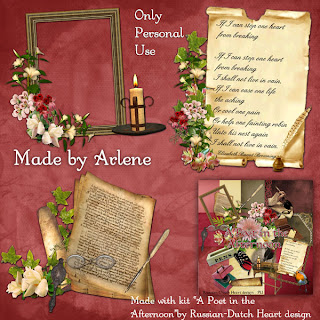 You're absolutely right! Children had some vacation a few days ago, and it looked like Christmas holidays! it was freezing cold, and in all supermarkets you could already find all sorts of toys, and... many chocolate boxes! (but for the moment I resist, LOL).
Thank you very much for your new kits, they are lovely, and thanks to Arlene too!
Have a wonderful day !
Florence

Yes, they do rush the holidays a bit, we get lots of advertising for Halloween and Christmas, but lose Thanksgiving in between! Too sad, now they want to have Black Friday shopping start on Thanksgiving day! The merchants are so greedy and so disrespectful to their employees anymore!
Good thoughts and prayers for Jan today and with the tests tomorrow.
Thank you and Arlene again for the fantastic gifts. Have a great Wednesday, check in on Friday! Hugs, Mat

These are beautiful and I appreciate them. I must tell you, however, the poem you quoted on the parchment is by Emily Dickinson. I would love to use this piece in a card for a friend who has lost her husband; please may you correct it? Thank you.

How do you ladies do it? Another gorgeous kit, along with beautiful clusters. Nice, nice.

I think it's the government's job to make life as miserable as possible for us "little folks". lol. It keeps them busy annoying us, and it keeps us busy trying to pay the bill.

We have another storm coming next week just in time to make travel miserable for the holiday. What else is new? lol.

Now I'm off to make some supper for Pogo and me. You have a great night, hugs, Edna B.

Thank you for the gift of your wonderful kit. I am an Emily Dickinson fan!

Hello and Thank you for these great downloads, lovely work.
Yesterday in the shops they had the area set up for Santa to sit and Christmas music playing as well as items for sale in the shops.
I hope Jan's test goes well and you both have a very good weekend...

Love it! I am quite good of this poem and was very happy to see it in your set for today.... wonderful kit and Arlene once again pleases the eye with her clusters..... Thank you so much.