Today it is raining, at least at the moment, and it might continue all day, if we can believe the forecast. But......... in a way I am glad, because then we can check if the rain stays outside LOL.
Yeah, Saturday we had the plumber around and he fixed the stuff at the gutter at the roof. So now here is hoping he did it well and that we are having no more leak in the kitchen
Jan and nieghbour of 1st floor still have to replace a part of the waterpipe near to our appartments. It's partly also and old pipe, so better replace all now, to be sure.
I am not yet jumping around of joy, but it looks as if the plumber's repair is the thing!

Thats the biggest and most important news of the weekend, hahaha. Rather poor but yet important.
Jan had to work morning shifts this weekend, and I felt sorry for him, cause he had to cope with a cold, it seems. Not yet gone completely, but I am glad he has his day off today and I urged him to take tomorrow to as day off, so he will have two days to recover from the shifts and his cold. Hopefully that will help a bit, he is so aweful stubborn that guy! Hard to tell how he is feeling, almost never says a thing and when I ask him, he gets annoid and always answers: "Oh, all is going very well". ( he even would say that if he was crawling around with an injury or whatever that caused a lot of pain,).
I should know by now after 20 years, not to ask, but I am concerned, of course. Well, I coped with that all that time, so I will continue doing it LOL!

Yesterday I really had no idea what to cook for dinner. At times fantasy really lacks, you know!
But of course I came up with something. It was a great thing to get rid of all "left overs".
I had a bit of mushrooms, and paprika left, and they had to be used soon.
So I bought some ham and grated cheese and made an own style of pasta.
I used 'Penne"for the past and made it like this:
Cook the pasta and in the mean time cut the paprika rather fine as well as onions, the mushrooms, the ham. Stir fry the onions and paprika first in some oil, after a couple of minutes add the mushrooms. At the last moment add some pressed garlic(I like to be it a lot LOL). All has to have still a little bite.
Pasta should be ready, so let it drop off the water and put it back in the pan. Add a few drops of oil and a little cube of butter. Then add the mishmash of the veggies, and the fine cut ham too, bit of pepper and salt some basilicum, and a nice quantity of grated cheese. Stir it well together, put in an ovendish  and on top a nice coat of greated cheese. I made it already in the morning so had to warm it in the oven.
Oven on about 200-225 degrees, first the pasta covered for about 20 minutes and the last 10 minutes remove the cover, so that the cheese on top can melt well and takes a bit color.
We added a saucage to it and it tasted really well!
I made a rather large protion, so today I have an easy job, we eat the rest of the pasta, with perhaps an omelet or a hamburger, or whatever comes into mind.


This should be more a blog about a bit of my life and about scrapping and designing stuff for it but at times it looks more to be a cooking blog LOL! Not so strange, because I like to cook, normally. There are days that I don;t like it, then it is a necessary thing to do, and then I throw some quick things together and that's all.

It really is getting colder around here! Even saw on the hews, that in France and Germany there are parts with a lot of snowfall, which is still very early for those regions. And in the Eastern part of Holland there is already a bit of frost during the night. Yak, it's not my favourite kind of weather, but alas, we will have to cope with it. Just hope we won't have to much frost and snow, specially now that Jan is a lot on the road. He cannot have too much ice and snow on the road, which will make it almost impossible for him to do his job!

I always end up with a longer post than I wanted ROFL.  So better I finish up now, and get a few things done around here.
I have a kit for you in a one color palette today, with some awesome clusters from Arlene. Kit is named 'Royal Red"and I hope you can use it for some layouts. Not the easiest color, but I know you are inventive, so hopes are high, grin grin!
Have a wonderful day, and stay safe! 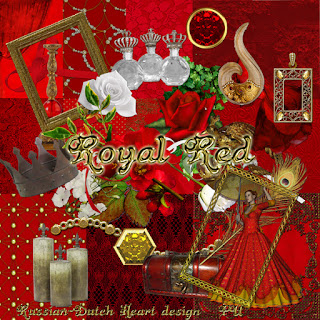 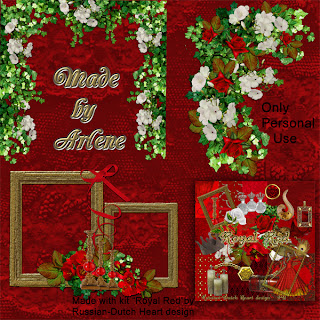 Red is a wonderful color, very strong and romantic. And it looks beautiful with Arlene's clusters. Nice job ladies. It's good that your leak has been fixed. When you have a house, it's always something. It's raining here too. Weatherman says we can expect four days of rain. Oh goodie!!

I was wondering how would get around in the winter weather. Will he be able to take the bus for a lot of his clients? That might help to keep him dryer. I'm at work, so gotta go. You have a wonderful day. Hugs, Edna B.

How wonderful for you if the leak is fixed. I hope it is! Glad you are making Jan take care of himself and he doesn't want to give his clients cold either! LOL! The pasta sounds yummy, I too, come up with some weird ideas in cooking that turns out to be very delicious. I love reading your blog! I also love, love, love this Royal Red kit and Arlene's clusters. Thank you so very much. Have a wonderful week ahead, check in again on updates on Wednesday! Hugs!! Mat

Another beautiful kit. Thanks so much for sharing with us. Enjoy your blog so much.... keep on telling us about your life.

What a striking kit! Thank you. I like Mat's overlay, too.

Good evening Kyra:)
So happy you have gotten your stubborn leak fixed!! I KNOW that has to be a great relief!!:)
Hope Jan is recovering from his cold. That has got to be hard on him riding in the cold ..with a cold.:(
Your meal sounds delicious!! Wish I could throw left overs together and make them come out nice like you do!! My Daddy use to do that and make some really tasty meals.:)
Oh..guess what?? My Mom got engaged a couple of weeks ago.She is 83 and her fiance is 81.LOL They are planning the wedding for Valentine's Day!!:) Guess that saying "It's never too late" really applies here..don't you think?:)
Thank you so much for sharing your GORGEOUS kit with me.I LOVE it!!:) Thanks Arlene for the PRETTY clusters too!!:)

This is Beautiful. I am living all the wonderful kits and clusters you and Arlene have created. Thank you so very much for sharing your talents.