Gosh, it was a bit wet during the weekend. And then I mean outside and inside too LOL.
Outside I don;t mind too much, but inside isn;t so funny.
One good thing, yesterday it was dry and so it was in our kitchen.
And I was lucky to get hold of the owner of the appartment, and he came yesterday to see what was the matter . Now he promised us to come by today again, and then first pour a lot of water on the balconies, to see if the trouble is coming from there, and if not it has to come from another place. Still I am glad he is cooperative and hopefully it soon will be over. Then the part of the wall has to dry out first, before I can give it another coat of paint.

Apart from that it was a rather quiet weekend, with Jan working most of it. Yesterday he had a rather long day, leaving home at about 7.15 morning and coming home at 15.45 afternoon.
Had to figure out something for dinner, and wanted to have a bit different thing, so I decided to eat fish. Found a couple of recipees on internet and I prepared my fish filet with a mix of two recipees LOL.
But it was very tasteful. You should try this out.

Take two filets of pangasius(but you could take also some cod for it). If you have the filets deep fried, first let them them thaw.
Recipee is for two filets.
Take an onion and cut it in thing slices, take a tomatoe and cut it in half and then in slices or take whole cherry tomatoes. Cut one or two cloves of garlic, cut them real fine.
Then take the filets and put on pepper and salt and rub them in with some pesto.
Rub in a baking dish with some oil.
Put in the filets, cover them with the garlic, tomatoes and onion, put on some fresh basil leaves, (or take some dried herbs, as basil, rosemary, thyme, parsil). Cover the whole with a bit of grated parmesan( or another cheese that you have at hand).
Pre-heat the oven at 200 degrees C, and then put in the dish, covered with some aluminium foil.
Leave it in the oven for about 15 minutes and then take off the foil. Let the whole stay in the oven for another 5-8 minutes.  All together it should be in the oven for a 20-25 minutes, depending of the thickness of the filets, check if they are well-cooked.
Then take them out, on a plate, serve with some roasted potatoes, or masched potatoes, a bit of salad and voila, a tasty meal, easy to make.

If you could do with a couple of clusters more from my Autumn Brings Beauty kit, just go to
Miriams's blog, where Mat has posted them. I just came from there and was happy to read that Miriam is doing allright, she just is still having terrible inter problems ad becomes very frustrated by it, according to Mat's post!

Arlene has sent me another bunch of clusters, the sweetie and she made them while she wasn;t feeling all too good. She had been feeling sick for a couple of days, still not all gone and is also very tired. Let's hope it will pass soon again. Told her perhaps a checkup by her doctor could be a good idea.

It is looking not bad outside, temperatures are around 57 F at daytime, so a bit fresh, but the sun is coming out and there isn't much wind, so all together it could be a nice day. Perhaps I will go out this afternoon, have to go anyway to deposit a bill at the bank and post a card, but it's much nicer to do so with nice weather.
Well, freebie time now I guess.
Today a kit in my favourite color again, yeah, and it's named "A Smile Works Miracles".
And they are accompanied by matching clusters from Arlene.
Have all a very good Monday! 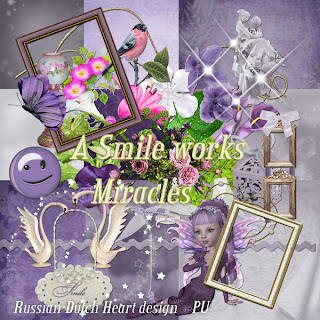 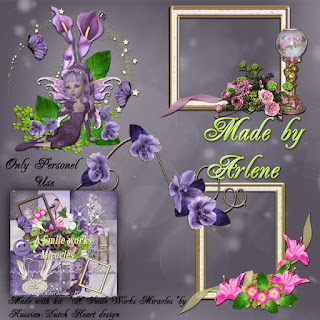 P.S. I noticed that the Shoutbox is not showing up at the moment,hopefully it will only be a temporarly issue!

Posted by smiekeltje at 9:06 AM

Surely hope they find the source of your water leaks, very frustrating to have water coming inside. Thanx for the lovely gifts again from both of you, love the idea of the clusters with the kit at same time. Glad you like the ones I have done, I have 2 more to come from the same kit and yes, was VERY happy to hear from Miriam. Cannot imagine her frustrations and unhappiness! I wish you a beautiful week ahead! Hugs! Mat

Hello and Thank you for this pretty kit and clusters.
Kyra I hope your neighbour gets the leak fixed soon and you don't have any more problems with it.
I hope Arlene feels better soon too...
Linda

Good morning Kyra:)
Hope they found where the water is coming from. I would hate for your painted walls and cupboards etc to get ruined.:(
Your fish dinner sounds yummy!!:)
I LOVE your new blog layout and header!Love all the sparkles too!:)
Christy,Jimmy and I are going out to lunch a little later on..then this evening..Jim will join us and we will go to dinner and a movie.:)

Gotta get ready to go now. Have a WONDERFUL day my friend.:)

Thank you for your Smile kit and Arlene for her clusters. The frames and flowers are beautiful and so is the pretty little poser. This new blog LO is gorgeous! I hope your inside dampness is soon gone. Try using a bleach wash on your walls before painting. That will kill any mold that might have started growing. Lots of good luck and love.

Thank you again for making such wonderful kits available for download. Wish I was half as talented at you. Keep after the landlord to get the leak fixed or you will have the same problem I had, mold, which has caused my asthma to get out of control several times. Seems like each time we think the mold is gone, we find all the spores weren't eradicated and my wheezing is the first sign that we have to treat it again. Blessings, Handmaiden Dotty