Another bike, and work the whole week

Jan's checkup visit at the hospital was good news. His doctor there(a female, I like her, she's really a good one) told him no strange blood vessels were found, also no sign of tumors or whatever. Still she had found a small change in his bloodsample, so to be sure all is well and it is just a temporarly thing, he is going to have a MRI scan one of these days. Well, good that she wants to be sure and gives him the checkups before something really is wrong.
And hoorray, Jan has found another bike, second hand but it's a good looking one, a bit more expensive than the other one, but I don;t mind, as long as he can use this one for a real long time LOL!
And good he found one, because he already has work the whole week, all morning shifts, only Saturday he has morning and evening shift and Sunday an evening shift.

Dikkie Dik isn;t yet completely the old one, but now he goes to his food himself and eats. Not much at a time, but if he does it several times a day, I am happy too. He even eats now the little hard ones again(must say I bought a pack of different ones for now, I know they like them) LOL.
So let's hope it will goup more and more. Still we have to be alert and monitor him well.

I was all active yesterday, wow! Did a laundry, washed the curtains from the front window, cleaned the window, plus all the glass windows in our doors, oh, even did some shopping, and was about ready with it when Jan came home.
We watched a bit tv, it was the opening of the new year in parliament, called Prinsjesdag. It's always nice to watch, the Queen rides in the Golden Coach, and speaks out the new "plans"of the governmnet for the next year. That isn;t the most interesting thing, but I like to see the ride of Her Majesty with her son(Prince Willem-Alexander and his wife Princess Maxima) and all the parade  and things around it.
Now there has to be formed a new government, but it will not be so easy, I guess. Out of the elctions came two parties with really a lot of votes, so normally they should form the government, but they are two rather different minded parties, know what I mean? It will take days or weeks to talk everything through, everybody has to compromise, of course but who will give in the most? Hmmmmmm, we will see what happens.

In the afternoon I did some designing and later made our dinner, of course. I have made on Monday some minced meat kebabs, and there were left a few so we finished them and I made pasta with it. I already had some ready made tomatoe suace and spruced it up with some left overs from red and green paprika, some mushrooms and black olives. First fried the cut paprika, threw in the mushrooms later and then mixed it with the tomatoe sauce. Pasta isn;t Jan's favorite food, but I like it a lot. So I had a great meal, Jan a bit less, LOL, but it tasted well !

Weather really has changed now here, every day we have some rain, temps are much lower, although thank God we also have some periods with a bit of sunshine. Still you can notice Autumn is in the air.

Clusters from Arlene, yeah! Wonderful ones, made with the Just You and Me kit. 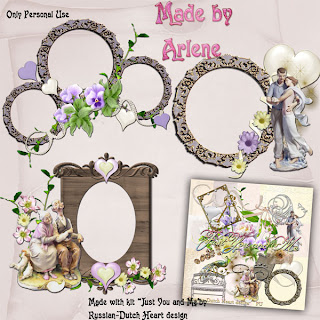 And do you remember the sneak-peek? I decided I will post that kit today. I've made two previews, one of the whole kit and one of the papers, so you can have a good view on them. I really loved making this kit, it has been a long time since I;ve made this kind of kit. I will reveal now what kind of kit it is(if you didn;t already had an idea LOL). It's a kit named "Go Steampunk", well name says it all.
Have a fantastic day! 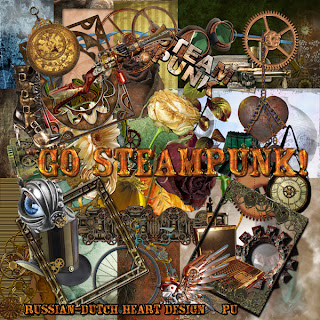 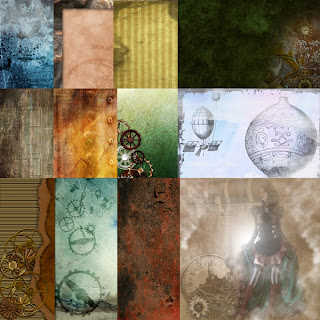 Posted by smiekeltje at 8:25 AM

That is wonderful news that Jan has a new bike. I also glad to hear that Dikki Dik is doing much better. Hope it keeps on that way. Gosh, you've been a busy little bee! Your steam punk kit looks fascinating.

It's 4:30 in the morning. I couldn't sleep so I thought I would catch up on my blog reading. Now I think I'll give sleep another try. You have a wonderful day, hugs, Edna B.

WOW !! beautiful quick pages, cute frames from Arlene, and what a kit !! I love this computer!
Again, thank you so much !
After all your worries, you were right to have a great meal with pasta! I would have done the same, and ended with a good home-made tiramisu and a cup of coffee of course, LOL.
Have a nice day,
Florence

Hello and Thank you for these lovely downloads.
It would be nice to think that Karma will catch up with the bike thieves. Many of the people who steal don't stop to think how their actions will affect their victims...
Linda

Congrats on Jan finding a new bike, hope no one steals this one from him and great news from his doctor! Glad Dikkie Dik is feeling better too! Arlene's gift is gorgeous as usual so thank her for it! This new kit of yours looks very interesting indeed! Love the colors, thank you so much for giving it to us! Have a terrific rest of the week, don't work too hard! I'm gonna be busy for a couple of days catching up work! :( then I can play with this new kit :) Hugs! Mat

this is my birthday today and I appreciate this beautifull gift twice :)

this kit is amazing! thank you so much, will share on my blog for sure this week-end :)

have a nice day
NathL from France

Good afternoon Kyra:)
So happy to hear Jan has another bike!! Hope this one does last him a long time.:)
I am also happy that Dikki Dik is feeling much better and eating again.:)
What a COOL kit!! LOVE it! Christy LOVES Steam Punk too.:)Love your "Never Let Me Go" kit too. One of my favorite color combinations! Thanks so much for sharing.:)
Sounds like you are doing your Spring cleaning again.:) I plan to tackle the inside of my oven tomorrow. I hope I win.LOL
I also want to thank Arlene and Linda for their lovely shares!! :)

Thanks so much for this kit as well as your other available kit freebies. Sure do appreciate it all.