Misunderstanding or just a fault???

Friday was a lovely day, weather wise. But also otherwise. We didn;t do too much, but tried our hands on one thing though. We have our big closet, in the backroom, where we have almost all our clothes and the bedwash and some other things. But one of the doors plopped out of one of its hinges, so it had to be fixed, before an accident could happen(like me openig the door and the bloody things coming out of all its hinges and dropping on me LOL).
Well the doors are quite heavy, so Jan needed a bit of help, to hold them in balance. Okay, one of the doors is done and then the other one. No, we didn;t manage. We will try again today, but Jan has to put a light on it, to see the screws and hinges well. They always say it's an easy systems, but to hang them right isn;t that easy, or may be it's  just the way we do it ROFL>

Then Saturday also was great weather, but Jan had to work. First just a morning shift, but later in the morning he phoned me to tell, they asked him for the afternoon too. Well, it brings money into the pocket, and it was great weather, so he accepted. I was glad he came home at time, around 17.30, but still he was a bit tired. I made us some hamburgers( made them myself) on buns. We spent the evening on the couch watching some great detectives and went to bed not too late. Jan had to work the next morning too.
So when he left that morning I first did some things on the computer, and just when I was almost done with that I heard some noise coming from the entrance door. And when I decided to have a look who came into the room??? Jan!
They didn't have him on the list ! The department of house care even did phone around for other locations, but no, his name was nowhere on the list. Still he was booked by his agency for that morning!!!
Well, if it is their "fault", he gets payed for the hours anyway, but it is strange.
So he will go there today to ask what happened. Still the whole day was a bit mixed up, because you wake up rather early, expect some working hours, and then ...........nothing.

Can you guess what we did a bit later that morning??? Yeah we took a nap, oh how lovely! LOL.

On to business now. Lovely clusters for you from Arlene, thiese made with the "As Time Goes By"kit. 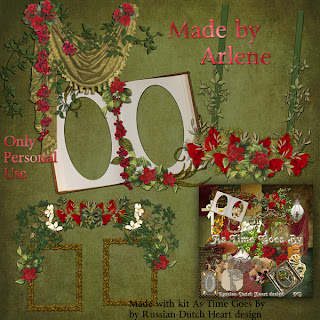 They really look great, hey? I LOVE the  swing she made.

And a kit in a bit nostalgic "shape", named "Sounds of Yesterday"
Have a great day! 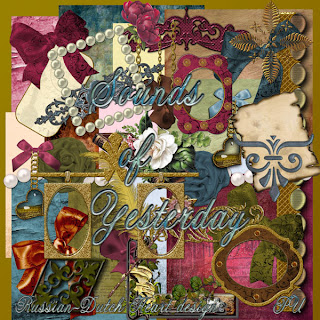 Yes, Arlene's clusters really look great, and I just love your new kit ! Thank you so much !!!
Florence

Hello and Thank you for these lovely downloads...

Thank you so much for this post. I want to let you know that I posted a link to your blog in CBH Digital Scrapbooking Freebies (please, notice the new url for my blog), under the Page 5 post on Jul. 09, 2012. Thanks again.

This looks like such a pretty kit. I especially like the pearl frame. You be careful working around the house. It's good that your Jan is so handy. Better you help him than to try fixing things by yourself. Many thanks to Arlene for her beautiful clusters. You have a wonderful day, hugs, Edna B.

Oh, love the colors in this kit. Beautiful... thanks so much.

yeah that happens where i work also. sometimes the work is all done but there is a person or two they forget or niss calling them to cancel

Thank you for all you gifts they are so pretty.Love the colors.Like the remember whens kits,I have tons of pictures to use then with.

Thank you so much for this post. I want to let you know that I posted a link to your blog in CBH Digital Scrapbooking Freebies (please, notice the new url for my blog), under the Page 18 post on Jul. 25, 2012. Thanks again.