The last couple of days were very quiet for me, not because I wanted it, but it was necessary.
I had a bit of trouble caused by my epilepsy, got a few absences(not that I was completely knocked out, LOL) and then I just have to let them happen and sit them out till it's over again. So I slept a lot, which is the best to do, and spent the days on the couch.
Result: not much done those days.
I always get a bit pissed off when I have trouble, but there isn;t much to do against it. Perhaps a bit more of the medicine would help, but if I only have a bit trouble every now and then, well, so be it, and I rather stick to the dosis of medicine I am taking now.
But yesterday I was "free"of  it again, still a bit tired, but I think today I am okay again.
Enough complaining, let's just hope this will stay away now for a long period.
Hahahaaha, when I have those "attacks"I always think I can control them more or less, at least to a point Jan will not notice. But he always does. Most of the time he says nothing, but I know he knows, cause he stays in my neighbourhood, comes checking when I stay too long out of the room, well, I know by little things.

Now that I am "fresh and merry" again, I think I will go out this afternoon, just for a short while, even with not too nice weather it will be nice to sniff a bit of fresh air. Need to get us some bread, cat food  just a few things.
And then this evening there will be the final of The Voice of Holland. There are 3 very good candidates, difficult to choose between them. I just hope really the best will win it, but the winner is chosen by votes of the public watching the tv, and then they can vote for their favourite by sms or phonecall. I think it would be better if it was decided by a competent jury, than by the public, cause it can happen that one candidate is very popular, because of his attitude or character, , and wins the competition because of that, but not because he or she is really the best "voice". Well, we'll see what happens.
Already nest week there is the start of a new Voice of Holland, but this time for kids.
Okay, enough bla-bla now, time for the freebie.
It's a little kit named "Somewhere", in pastel colour.
Have a wonderful weekend and see you again on Monday! 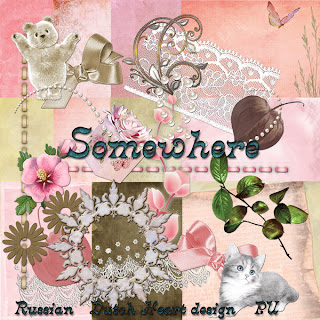 Thank you so much for this post. I want to let you know that I posted a link to your blog in CBH Digital Scrapbooking Freebies, under the Page 6 post on Jan. 20, 2012. Thanks again.

So sorry to hear you were not feeling so good. Glad things are better. I know how you feel I get migraines!!
I can loose up to weeks at a time from them. But on a better not I love this kit.!!!! Thank you.

Kyra I am sorry to hear of your troubles but happy that it is all over and you are yourself again. The kit is charming. Thanks for sharing

As always, your kit is beautiful. You have such a wonderful, creative talent. Thank you for sharing!

Good morning Kyra:)
SO happy your episode is over now and you are back to your cheerful self again.:)That really has to be frustrating for you.I have a Nephew..by marriage who has epilepsy and his wife gets really concerned when he has those.:(
Your kit is so PRETTY!! I can't help it..I LOVE pastels and lace.:)Thank you so much for sharing it with me.
Hope you are enjoying your weekend.They seem to go much faster these days..huh?:)