It has been a nice, easy, relaxing weekend, I don't mind having that kind of days!

The "pet-holiday-hotel" has opened it's doors yesterday. Early afternoon Danny, Heidi and Séverine came to bring the bird and bunny, with all the stuff as food an straw etc. We had a little chat, which was nice and then they left again. They will go on their holiday tomorrow in the evening, Danny likes it better to drive at night, he says it's much more relaxing and not so crowded too on the roads.
So when they had left, we thought it might be nice to put the bunny in the garden. Not running around freely, cause he can escape to other gardens, but Heidi brought with her a kind of large cage you can put up for the bunny. So we set it up and released the bunny into it. It's bigger than his daily cage, so the poor thing can run a bit around. Oh, he was quite happy with it, nicely in the shade, being able to sniff some fresh air and even touch noses with our Dikkie Dik! He likes it from time to time to take a look at that funny animal and after a few minutes it's enough for him. But the stupid Brodski doesn;t like the bunny at all! From distance he looks with a suspicious eye at it, and he is in NO hurry at all to enter the room at the room!
The bunny is close to the door, so when Brodski wants to pay us a visit he has to pass the cage with the bunny! And it seems to frighten him a bit LOL! I think this will pass after a few days, but if not he will have some hard weeks ahead, ROFL!!
Heidi and Danny will be away for about 4 weeks, so the birdie and bunny will have some awesome weeks, hahahahah. They will be pampered a bit, I am sure, and the cats will feel a bit neglected, in their opinion, and Jan will do most of the work, like cleaning the cages, feeding the "guests" etc.

Weather looks nice again today, so I will take advantage of that bu doing some shopping today, and perhaps turn on the washing machine. Friday I did a good cleaning of the bathroom/toilet, hoovered the house, dusted the room, well, the always returning things you'll have to do,  and yeah, Jan washed the outside of the front windows, which is quit a difference. You can really look "through"them LOL!
I have a funny litttle kit for you today, nemd "Mousing Around". Have some fun with it!
And as it is still early, I can play a bit in my PSE, before I have to move around, I think that is a good plan!
Have a wonderful day! 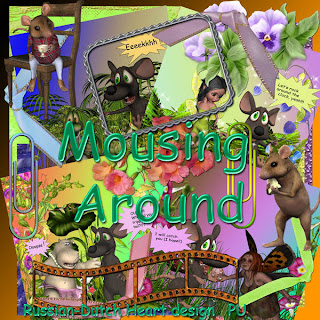 What an adorable kit. I love cute mouse graphics. Just not the real thing! Enjoy your pet visitors. I think this is a good way to have some different pets. Babysit for others once in a while.

Now it's time for me to pack up and get ready to go home. My little girl will be waiting at the door when I get there. You have a fantastic day. Hugs, Edna B.

Good morning Kyra:)
I am soo happy for you concerning your health and you feeling better.Better is good.:)I was wondering if you kept snacks next to your computer..so you can nibble and gain more weight.I am the opposite from you.I need to lose weight...so no snacks by my computer.LOL
I know what you mean about no good shows on television...and we pay soo much for nothing sometimes.:) The way I do it is..during the off season of my favorite shows..I watch the ones I didn't watch while they were on.:)So..during the summer..I still have things to watch.Does that make sense?LOL
Wow..a four week vacation??? I would forget where I lived if I stayed gone that long.LOL
Enjoy the little critters and don't work too hard.:)

Thank you so much for this post. I want to let you know that I posted a link to your blog in CBH Digital Scrapbooking Freebies, under the Page 3 post on Jul. 11, 2011. Thanks again.

I've been busy lately and not much time for 'surfing'. Bless your hearts opening up a pet hotel. lol I guess the good thing is the cat is afraid of the rabbit and not looking at him as his next meal. Love the pics of your flowers - looks like your garden is blooming nicely. I see I've misses several cute kits you've put together too. Thank you for sharing your corner of the world with us and thank you for sharing your talents! Have fun petsitting.

Just a quick note to let you know that a link to this post will be placed on CraftCrave in the DigiFree category today [12 Jul 01:00am GMT]. Thanks, Maria