It was nice weather yesterday, so I went shopping a bit earlier than normal. It seemed to be a good decision, cause when I arrived home again, Jan told me that Heidi called. And just a few minutes after the message she was standing at the front door already!
It was real nice to have a talk again. We took our cups of coffee with us in the garden after there was the "garden inspection"LOL.
Heidi told me that Séverine was doing already better( the little one wasn't feeling quite well, but Heidi couldn;t pin point to the cause, may be it was a kind of flue she had, not really sick from it, but you better can be real sick of it for two days and recover for a few days, but than you've had it. ) But okay, she is doing lots better now, having more energy and Heidi told me that her girl is now on judo! Doing a sport isn't bad at all, but it made me laugh to hear she is doing a fighting sport. She will have a hard time, but Séverine is quite a fanatic and determend, so I hope she will not give up to easily.
Then Heidi and I talked a lot about plants and gardening, of course, and may be we will go this year to a garden centre again, somewhere in April or May. It should be nice to spend some time in a garden centre again, the last time we did that was about two years ago, I think!

After she had left, I tried my hands on the start of a new kit, but I didn;t succeed very well. I have an idea in my head, how it should be, but the first few papers didn;t meet the expectation, so I deleted them again, LOL.
Then had to make dinner, after dinner I tried again, and no, hadn;t success either, so I shut down the computer and went watching a soccer game of the Dutch team. Was one of the matches of the way to the European championships, they have to play several countries in the same pool and should be nr.1 or2 in that pool. Well, till now they are doing allright, though not showing their very best play. At the same time the Belgians too had a game to play, so we switched a bit between the two channels LOL. Yes, we do support a bit too the Belgians and you know why? As a joke we call them: Spare Dutchmen! That's because centuries ago Holland and Flanders ( the Dutch part of Belgium) were one.
Okay, enough joking around.
Today we start with a little daily download, fantasy related. I;'ve made some bragbook pages with some lovely fairy poems I stumbled upon. Also I've made a front and back cover for it, but that will be shown at the last download( I have 4 daily downloads for you).
Yes I sometimes return with pleasure to the designing of fantasykits or quickpages. Once infected by the "Minky-virus" you cannot get rid of it HAHAHAHAH< I LOVE it,
Seems to be a bit cloudy today, could be a good day to do some work around the house.
Have a gret day and I hope you can use the "Fairy Poem Photo Album". 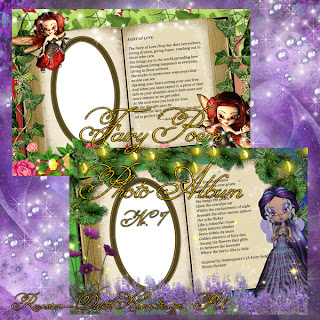 lol...Fairy Virus, hey??? Not so nice weather today here, rather grey. But as I'm locked up at work in the moment I don't really mind,lol-at least it was nice while I was off. Have a great day -the mad Witch..heheheheh:)

Good morning Kyra. It was nice that you could sit in the garden with your friend and enjoy a visit. It's still a bit cool here to do that. But at least I am getting my little pots and seeds ready for planting.

I love your new brag pages. The poems are lovely. Now I'm off to get a few things done here. You have a great day, hugs, Edna B.

Thank you so much for this post. I want to let you know that I posted a link to your blog in CBH Digital Scrapbooking Freebies, under the Page 8 post on Mar. 30, 2011. Thanks again.

Just a quick note to let you know that a link to this post will be placed on CraftCrave in the DigiFree category today [31 Mar 01:00am GMT]. Thanks, Maria