It makes such a difference to wake up in the morning and having sunshine! Even if temperature is still not too high, but creeping up slowly a bit, just the look of the sunlight into the room makes you feel much better.
We even could open up the gardendoors during the weekend for a while and belive it or not, I had my first sunbading! I definately need some colour back onto my skin, so Saturday I could sit for a moment in the sun, did that for about 15 minutes and oh my, it did feel good! And also yesterday about 15 minutes, so the start is there. I need hours and hours to bring back a bit of  colour on my face, but this spring sun has to do it.
After the rather busy week I had a real quiet weekend, especially on Saturday, and also that did me some good. I did a bit of designing, even got a bit behind on reading the blogs of my friends, but I did that yesterday again.
Watched a lot of tv, in the evenings there was to see a darts championship, held here in Holland between the best placed darters of the world, among them also Dutchies and we had some real good games.


Oh, Saturday afternoon the door bell rang and there was Jan's brother Rob with his son. So we chatted a bit, and it was nice.Rob had some difficult times during the last years, but he is doing quit allright again, only with his son he always has some problems to solve and I fear he will have to do that for more years to come. The boy almost is 18 now, but seems to get into some trouble every now and then. It often is caused by a kind of lazyness and indiffrence, I think, not really by intention. But it's about time he realizes he has to take some responsibility himself and not leaning back on his father. So Jan and I tried to talk some reason into his head and explained the several possibilities of his actions(or better said: not acting LOL) . I don;t know if he will do anything with it, although he has really some respect for us. Well, let's hope that some of it will do some good.

We did had a real yummie dinner yesterday. It was a kind of very small celebration dinner, because of our 19th anniversairy, so I bought us some big shrimps,  and made a potatoe salad with it. The shrimps I prepared already in the early afternoon, made a marinade of sunplwer oil and olive oil, with some salt ,pepper and paprika and LOTS of garlic and had put it away in the fridge for a couple of hours. Then I only had to stirr fry them for a couple of minutes in a pan and ready! And they tasted real yummie. Good we didn;t had visitors on Sunday evening, because I think we were surrounded by a heavy garlic odeur LOL!
Today will be back to normal, that means, doing some things like " housework", oh joy, that is one of my favourite things to do, grin grin, but I still didn;t see a small, tiny flag in the garden, announcing that the cleaning fairies are around, and I am pretty sure they will not arrive later this year either.
It's more the starting, that is the hardest, once you are busy with something it's okay and when it's finished and all looks shiny again, it gives a good feeling. So I just have to give myself a kick on my bottom and go for it, yeah!
As the last few days were rather sunny and spring looking, I though I might give you a small kit in pastel colours namend "Springy Days". Later this week I will have another installment of the Book for Children for you, if you want to have it.
After posting a quick coffee again, may be half an hour of playing around on the computer and then on to house-business!
Have a great day everybody! 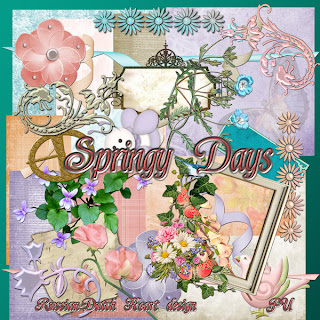 Good morning, Kyra. It's good to hear of your early sun bathing!! Spring does wonderful things to our minds and fills us with lots of energy. I think that's why it's my favorite season. My flowers are starting to push their way up from beneath the ground, and there are bits of green everywhere. I just love it!! Your shrimp dinner sounds yummy. I don't eat shrimp, but the way you prepared it sounds delicious. I do like garlic on my foods. It's time to go post my own blog now. You have a fantastic day, hugs, Edna B.

That is so try about how much better the sun will make you feel! It's gray and gloomy here. Thanks for the freebie. Another really cute kit! Enjoy your day!

Good morning Kyra:)
It was really nice here yesterday.Not much sun..mostly cloudy with a cool wind..but it was just perfect for Jim to work in the yard and he sure did that.:)Mowing...raking..cleaning ..repairing..and he even built another bird house feeder.:)
Your shrimp dinner does sound delicious.:)mmmm
Thank you so much for sharing your lovely Springy Days kit.So pretty!:)
Have a fun day cleaning the house up.Put on some of your favorite music and get to it.LOL

Thank you so much for this post. I want to let you know that I posted a link to your blog in CBH Digital Scrapbooking Freebies, under the Page 6 post on Mar. 21, 2011. Thanks again.

Just a quick note to let you know that a link to this post will be placed on CraftCrave in the DigiFree category today [22 Mar 01:00am GMT]. Thanks, Maria

I want to say Great Job on your Spring Collection and that it was free. You sure do have the talent to create. I can only hope to do a good job with this. Thank you again.